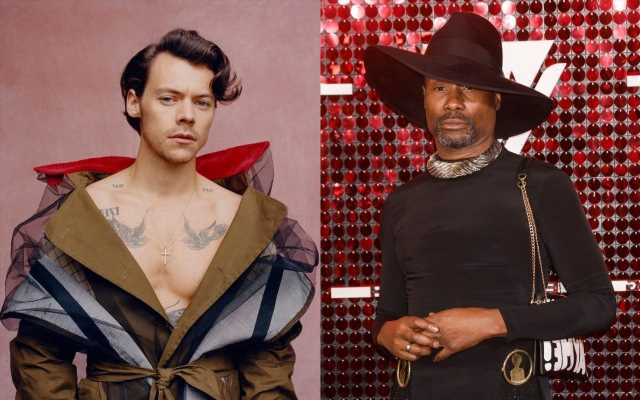 The ‘Pose’ actor puts Vogue magazine on blast for featuring the One Direction member in a dress on its front page, insisting he was the real game changer in cross-dressing.

Fashion icon Porter, who has worn gowns on several red carpets, including at the 2019 and 2020 Academy Awards, thinks the praise Harry received for wearing a lace-trimmed frock on the cover of the December, 2020 issue was misplaced.

“I changed the whole game I. Personally. Changed. The. Whole. Game. And that is not ego, that is just fact. I was the first one doing it and now everybody is doing it,” Billy told The Sunday Times.

“I created the conversation (about non-binary fashion) and yet Vogue still put Harry Styles, a straight white man, in a dress on their cover for the first time,” he says, referring to the fact the former One Direction star is the first man to be granted his own solo cover in the magazine’s history.

“He doesn’t care, he’s just doing it because it’s the thing to do. This is politics for me. This is my life. I had to fight my entire life to get to the place where I could wear a dress to the Oscars and not be gunned (down). All he has to do is be white and straight.”

Although Harry’s photoshoot made headlines, he was not the first musician or actor to rock a dress on a magazine cover. Kurt Cobain, Brad Pitt, and non-binary “Queer Eye” star Jonathan Van Ness have all done so previously.

“The minute a man puts on a dress, it’s disgusting, so what are you saying?” Billy continued. “Men are strong, women are disgusting? I’m not doing that anymore… I’m a man in a dress, and if I feel like wearing a dress, I’m gonna wear one.”