Billie Shepherd has announced the arrival of her baby girl with husband Greg Shepherd, revealing she gave birth on Friday.

The former TOWIE star, 32, took to Instagram on Sunday to reveal the happy news as she shared a picture with their ‘precious little darling’ taken in the hospital, but did not announce the tot’s name.

In the caption of her post, she gushed: ‘Welcome to the world our beautiful baby girl [heart] 02~12~22 [heart] We are so in love with our precious little darling [heart].’ 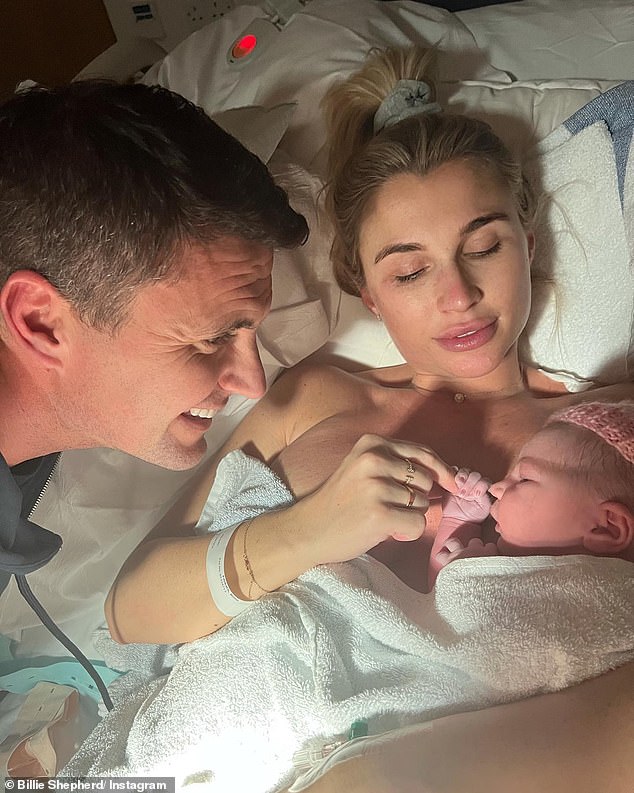 Congrats! Billie Shepherd has announced the arrival of her baby girl with husband Greg Shepherd, revealing she gave birth on Friday

Parents: In the caption of her post, she gushed: ‘Welcome to the world our beautiful baby girl [heart] 02~12~22 [heart] We are so in love with our precious little darling [heart]’

It comes after Billie opened up about the final days of her pregnancy in an exclusive interview with MailOnline in November.

She admitted that although she’s had a ‘second wind’ of energy in recent weeks, she feels ‘ready to pop’ and believes she will go into labour soon.

Billie told MailOnline: ‘I’m ready to pop, I have times where I feel so heavy and uncomfortable but I feel good, we’ve had a lot with the move, family, work and juggling two children as well. 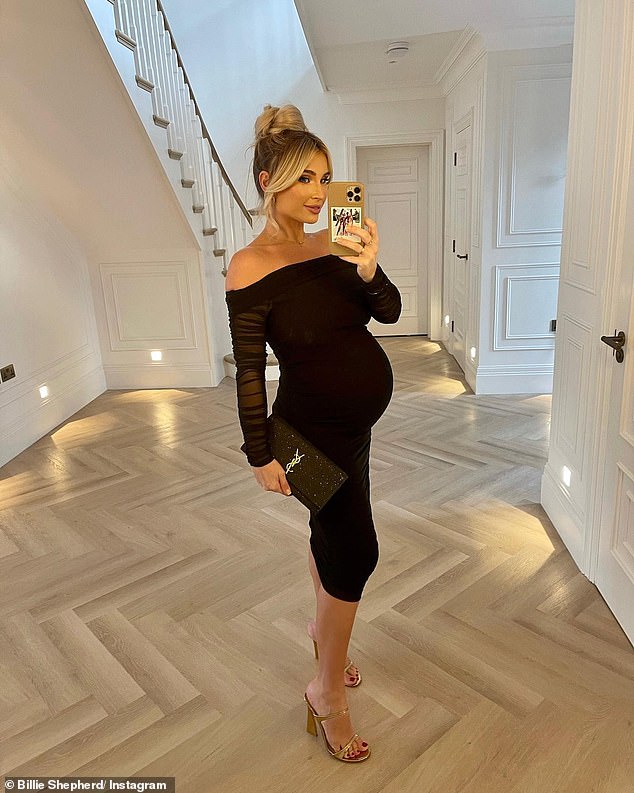 Prediction: The former TOWIE star, 32, admitted that although she’s had a ‘second wind’ of energy in recent weeks, she feels ‘ready to pop’ and believes she will go into labour soon

Speaking about how she juggles it all, being her career, her recent house build and motherhood all the while being pregnant, Billie said she’s grateful for having a supportive network around her, including mum Suzie Wells and sister Sam Faiers, 31.

‘It is a lot of juggling and planning and I have a really good support with my family, mum, Greg, but I am getting tired and in the next week or so, I will start winding stuff down,’ she said.

Billie said that the whole family are beyond excited to welcome the new addition to their brood in coming weeks – particularly Nelly and Arhur.

She told MailOnline: ‘Once the baby is here we can just relax and be in that baby bubble. I’m so excited for Nelly and Arthur, they talk about the baby all the time.’

Billie and Greg shared the happy news they were expecting a third child back in June while enjoying a family holiday in Abu Dhabi. 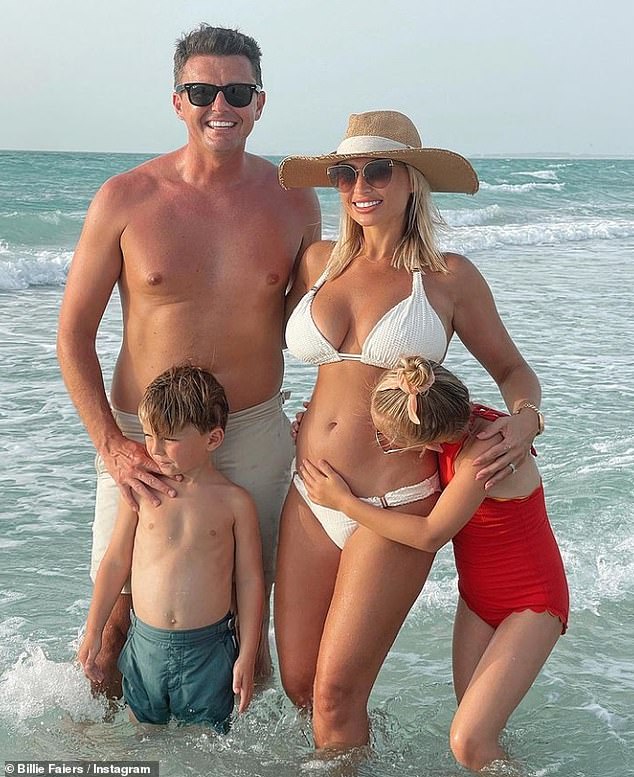 Happy news: Billie, who shares daughter Nelly, eight, and son Arthur, five, with husband Greg Shepherd, revealed in June that she’s expecting her third child while on holiday in Dubai

She wrote alongside a family Instagram snap: ‘Baby number 3 we can’t wait to meet you. We are so happy and excited.’

The couple have been together since September 2011 and got engaged while on holiday in the Maldives in 2014.

Billie and Greg returned to the Indian Ocean island paradise for their wedding, tying the knot in March 2019.

Throughout her pregnancy Billie showed off her growing baby bump in a number of stylish outfits at events.

The mum-of-three also opened up about her journey as her body continued to change including her boobs growing to a size 34E, the biggest they’ve ever been, and were really ‘annoying’. 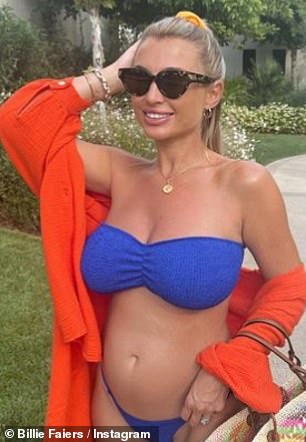 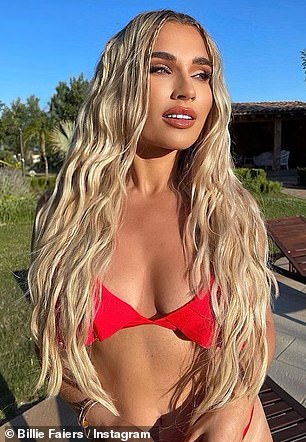 ‘My boobs are bigger than ever’: Throughout her pregnancy Billie opened up to fans about her body changing and said her boobs grew to a size 34E, (left) and became really ‘annoying’

She revealed: ‘My boobs are bigger than ever. They’re really big and quite annoying. In certain clothes, especially in pregnancy it’s nice not to wear a bra, and swimwear is really hard to buy.

‘And the extra weight! My boobs have gone up and down over the years but I don’t mind because I really like natural boobs.’

Billie, who also shares daughter Nelly, eight, and son Arthur, five, with Greg, detailed how she was previously left with ’empty sacks’ after having her other children.

She continued: ‘I had empty sacks before my wedding, but they came back about three years after Arthur. I have loads of white stretch marks on my boobs from where they’ve gone up and down over the years too but that doesn’t bother me.’

The Mummy Diaries star also said that she had been seriously craving tea and biscuit recently but has now ‘gone off meat completely’.

Billie and Greg recently moved into their sprawling new home in Brentwood, Essex after a three-year renovation project.

The pair paid £1.4 million for the dilapidated property and were beset by planning issues, before knocking it down and building their dream home from scratch.

Greg has also added a ‘man cave’, converting the original garage into a gym and games room, while there will be a play room for their two children.

Work began on the house in January 2021 following months of delays due to planning rows with their new neighbours. 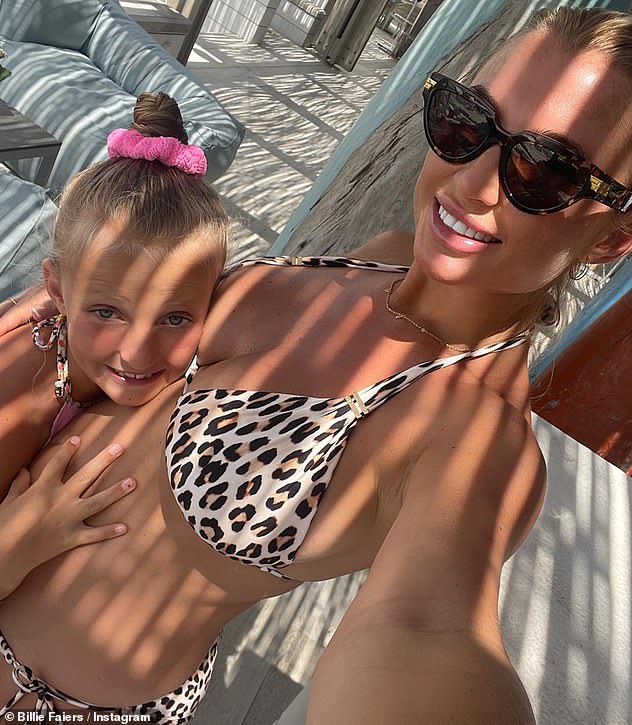 Growing bump: The Mummy Diaries star also added that she seriously craved tea and biscuits but has ‘gone off meat completely’ (pictured with daughter Nelly, eight)