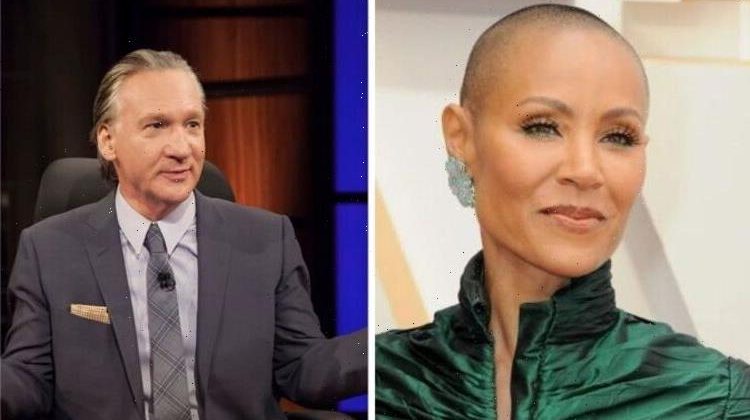 Will Smith and Jada Pinkett Smith pose together at Oscars

Bill Maher, 66, has spoken his mind about the Oscars 2022 debacle involving Will Smith and Chris Rock. The TV presenter addressed the incident on his self-titled show, Real Time, on Friday.

Bill said that Jada should “thank God” that alopecia is her biggest medical concern.

The star had lawyer Laura Coates and former presidential candidate Andrew Yang by his side as panellists on HBO’s Real Time.

Bill said: “If you are so lucky in life as to have that be your medical problem, just say ‘thank God’.”

He explained that the condition is not life-threatening and is a common part of ageing for many.

He continued: “It’s not life-threatening.

“Ageing is, trust me I know, it’s the degradation of the flesh. It happens to all of us,” added Bill.

He then joked about Will’s reaction to the comment made by Chris Rock about his wife, saying that his sensitivity was an overreaction.

Bill said: “You know, just put on a f*****g wig like everybody else at the Oscars if it bothers you so much.”

The condition is distinct from androgenic areata, the pattern baldness common in ageing for men and some women.

As a result, husband Will Smith stormed the stage and slapped Chris for the quip.

During the panel discussion, Laura said she couldn’t believe that Will received a standing ovation after he won an Oscar for Best Actor.

“I thought, ‘Why is he even there to get the award?” said the lawyer and CNN legal analyst.

Continuing the discussion, Andrew said: “Part of it was, he’s Will Smith.

“Anyone else would have been ushered out.”

Bill also spoke up about his annoyance with the fact that Hollywood stars frequently use the term “micro-aggressions” when faced with passive-aggressive conflicts.

“Suddenly they’re okay with this.”

The host added that he thought it was a moment that showed “broken morals”.