Beyonce and Jay-Z looked picture perfect as they sat court-side at the Barclays Center when the Nets took on the Milwaukee Bucks.

Talk about a power couple! Jay-Z and Beyonce put on a loved-up display when they were photographed at the June 5 Brooklyn Nets game against the Milwaukee Bucks at Barclays Center in Brooklyn. The Dangerously In Love singer, 39, put her best foot forward as she sat court-side in a vinyl LBD, which she paired with a glittering black and silver bedazzled jacket. Meanwhile, Jay-Z, 51, cut a chic figure in a casual black outfit, as he accessorized with a Rhude baseball cap, white sneakers with a green stripe, and gold jewelry.

Bey also put the look on display in a series of snaps posted to Instagram earlier in the day. Fans got a closer look at her oversized jacket, which featured shiny vinyl cuffs and a collar. She also completed the look with a pair of black Louboutin stiletto pumps. The Brooklyn native, who is an outspoken Nets fan, also opted for dark shades and looked picture perfect as he snuggled up to Bey while watching Round 2, Game 1 of the 2021 NBA Playoffs. Others stars in attendance included Trevor Noah and Travis Scott.

It comes just one week after Jay-Z revealed he learnt how to swim when he was in his 40s, after Beyonce gave birth to their first child, Blue Ivy Carter, 9. The rapper, who also shares twins Rumi and Sir, 3, with the singer, opened up on a new episode of LeBron James‘ show, The Shop: Uninterrupted, about being a father to young girls. “It’s amazing. It’s a very grounding thing… I didn’t learn how to swim until Blue was born,” he revealed. 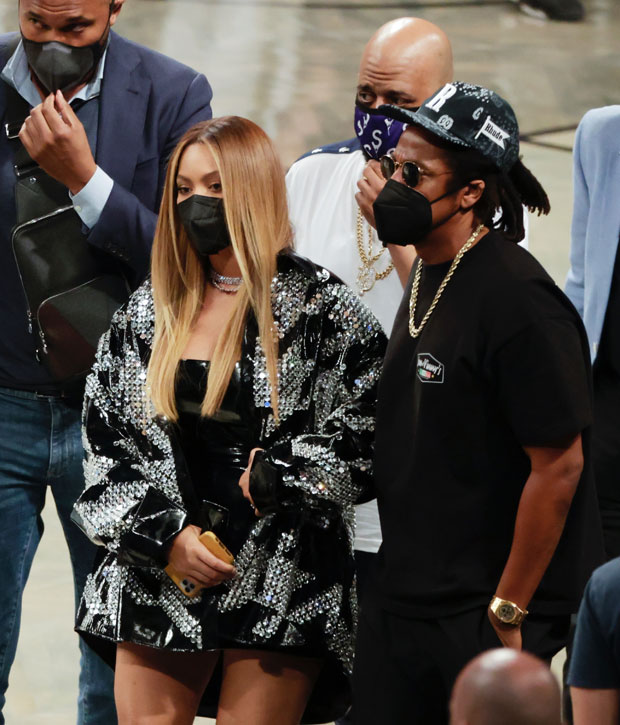 “There goes everything you need to know. This is a metaphor for our relationship. If she ever fell in the water and I couldn’t get her, I couldn’t even fathom that thought. I gotta learn how to swim. That’s it. That was the beginning of our relationship.” The “Empire State of Mind” rapper also discussed his Rock & Roll Hall of Fame nomination in early 2021, hilariously sharing that Blue Ivy didn’t have much of a reaction.