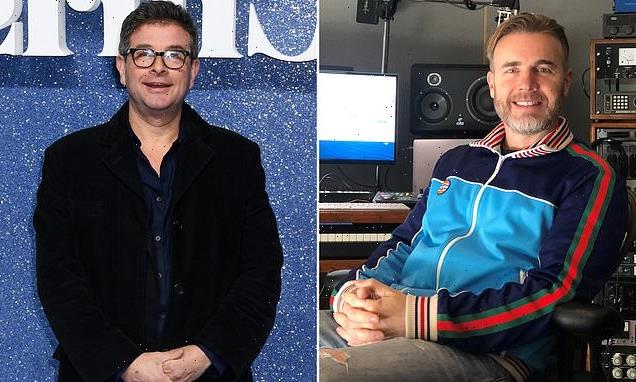 BAZ BAMIGBOYE: Forget Cats… this new musical is a treat for dog lovers!

The premise is a simple one. A fictional West End musical entitled Dogs is to be turned into a feature film. What could possibly go wrong?

The original television comedy emerged from an idle question posed to producer David Livingstone (the man behind Brassic, the Oscar- winning film Judy and the movie Pride): how did the film version of Cats come about? ‘Decisions are made as you are running down corridors,’ Livingstone told me.

He later discussed that question with his wife, and during that conversation came a light bulb moment.

‘We should do a TV series about the making of a film, based on a huge, long-running hit musical . . . and we should call it Dogs.’ 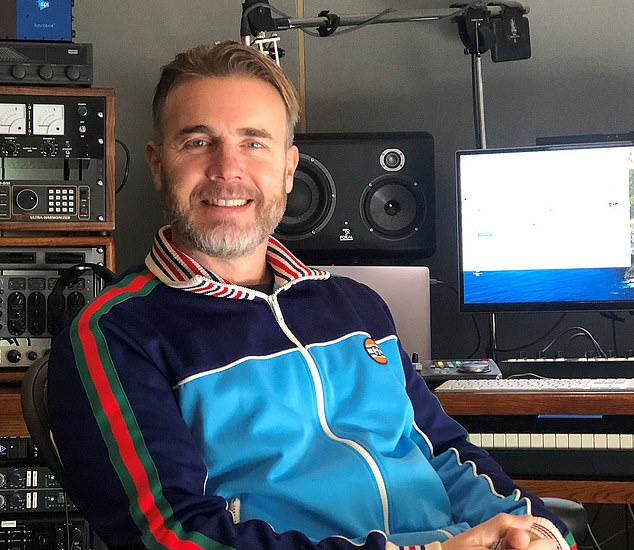 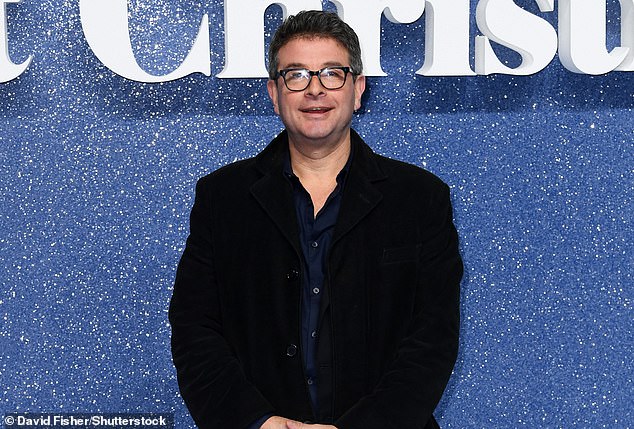 It has been created by Sean Gray, who worked as a writer and co-executive producer on Armando Iannucci’s hit Veep series, and also collaborated on The Thick Of It.

Gray was engaged to write it, and Gary Barlow has penned several songs for the musical within. ‘It’s both funny and touching,’ Livingstone said of the show, which focuses on the ‘nature of ambition and fame’.

Barlow, who’s currently taking his solo show A Different Stage around the country (it heads to the Duke of York in London’s West End in late August) initially wrote four songs for Dogs; and then created more, as further Gray scripts arrived. ‘There are new songs for every episode,’ he explained.

Both he and Livingstone stressed that they’re not joke songs. ‘They’re written from the dogs’ perspective,’ Livingstone said, seriously. They would not reveal which breeds are included in the show-within-a-show that is Dogs.

But the producer assured me that ‘dog lovers will love it’.

Now, I know you’re reading this on April 1, but this project is genuine, and has been in the works for at least two years — since Tom Hooper’s film adaptation of Andrew Lloyd Webber’s record-breaking Cats (based on T.S. Eliot’s Old Possum’s Book Of Practical Cats) was released to critical opprobrium in 2019.

Fur flew when Lloyd Webber distanced himself from the movie, placing the blame for its failure firmly at Hooper’s feet.

But Dogs isn’t just Cats under a different pelt. It’s a whole new breed of show. No real animals will be hurt during the making of the programme — which could shoot at the end of this year — though I’m sure some human egos will be bruised.

Gary Oldman said one of the pleasures of working on the breathtakingly brilliant Slow Horses series (which starts on AppleTV+ today) is that the filming schedule allowed him to have the occasional long break.

So far two books from Mick Herron’s Slough House series of spy novels have been filmed — the first, Slow Horses; and the second, Dead Lions — with six episodes each. 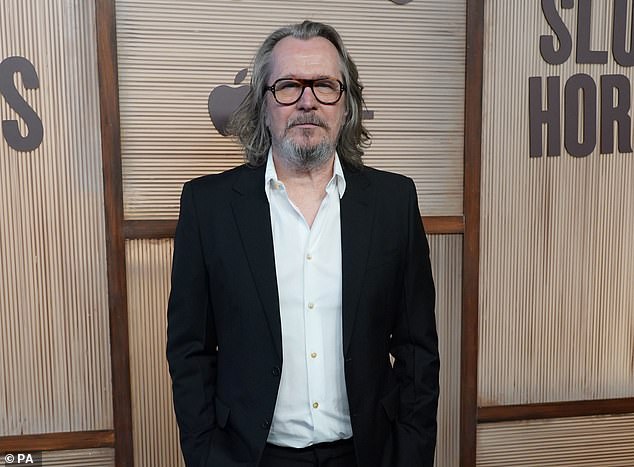 One hobby that the Oscar-winning actor has taken up with gusto is photography. He said it’s his ‘passion’ to print photographs ‘the old-fashioned way’, on glass.

To that end, he has a studio complete with darkroom; plus an old ambulance that’s been converted into a mobile developing unit. He’s also been kept busy looking after two hummingbirds — nicknamed Bill and Ben — found abandoned in a nest in a citrus tree on his property in Palm Springs.

‘They need feeding every two hours,’ he told me, as he explained how he and his wife Gisele set alarm clocks so they can be on duty. ‘They’re indoors, away from the dogs, and I’ve kept them safe. We’ll let them go soon, when they’re strong enough.’

Oldman said he had ‘no complaints’ about his life. ‘I’ve been luckier than most,’ he said, noting that he’s proud of his kids (‘they’re good people’); proud that he stopped boozing (he hasn’t touched a drop in 25 years).

Even though he won an Academy Award for portraying Winston Churchill in Darkest Hour, and accolades for his Smiley in the film Tinker Tailor Soldier Spy, he believes Jackson Lamb is the best role he’s ever played. The author visited the set at one point, and mentioned the title of his latest Jackson Lamb tale.

‘He said he’s called it Bad Actors — which isn’t a comment on us!’ Oldman said.

Would you still watch Will?

Will Smith disgraced himself with shocking, violent behaviour at the Oscars last Sunday night.

But you might still want to see his new film called Emancipation, due to be released by Apple films later this year.

I hear it’s very good. Better even than the King Richard movie that won him his Oscar.

People are going to have a moral dilemma here. How do you separate performance on screen from behaviour in public? Can you cheer one while condemning the other?

The problem for Apple (and Smith) is that their man, in this film about a runaway slave, won’t shake off the shackles of his reckless, shameful outburst any time soon. The fact that he did that in front of two billion people, on live television, is incomprehensible.

After a series of setbacks, Kristin Scott Thomas’s dream directorial debut is full steam ahead again — with Sienna Miller and Scarlett Johansson signed on to star in her film.

But there’s a twist: it’s not the project that she started out with.

The screen dame had spent years adapting Elizabeth Jane Howard’s 1959 novel The Sea Change, a story of love and tragedy involving a couple mourning the death of their daughter whose lives are changed by the arrival of a mysterious young woman.

But Scott Thomas wasn’t able to get that film financed — even though she had done a complete cinematic makeover of Howard’s book, in the manner of Anthony Minghella’s interpretation of Michael Ondaatje’s The English Patient. 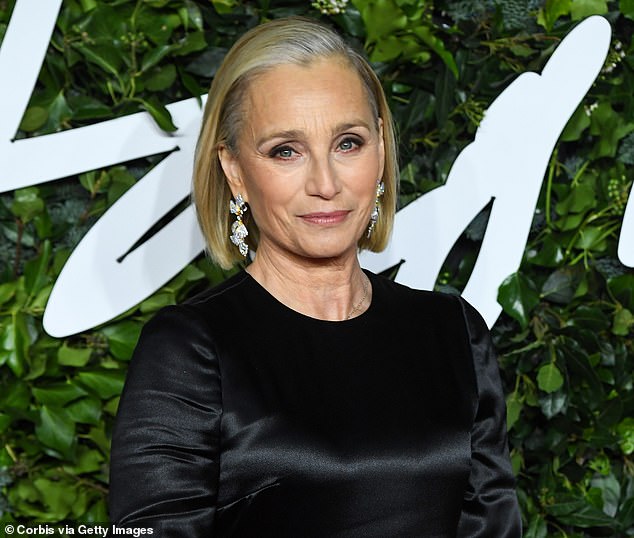 After a series of setbacks, Kristin Scott Thomas’s dream directorial debut is full steam ahead

She and Ralph Fiennes were sensational in the 1996 Oscar-winning picture, and she told me once that she loved the fact that ‘the film stood totally on its own’. Now, Scott Thomas has written a film based on a story of her own. It’s currently known as Kristin Scott Thomas Untitled.

Miller and Johansson will join Emily Beecham, who won the best actress prize at Cannes three years ago for the film Little Joe, to play three sisters. The storyline is being kept a tightly guarded secret, even as to whether or not the picture is based in some way on Chekhov’s play.

Scott Thomas spent years raising money for the Howard book project, only to have her hopes dashed repeatedly. But she has secured funding for the new, Untitled venture — thanks to producer Finola Dwyer. And, equally importantly, the stars are rallying to her cause.

Scott Thomas has been engaged in pre-production duties with her casting and creative chiefs, to ensure cameras will roll this summer, shooting key scenes in and around London and the Home Counties. (The locations in Howard’s book — which include London, New York and the Greek island of Hydra — were perhaps just too expensive.)

In the meantime, Scott Thomas has been helping to launch the excellent spy drama Slow Horses, which streams on Apple TV+ from today. 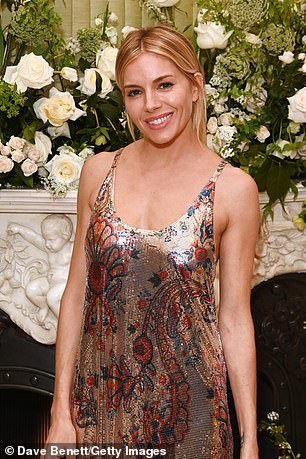 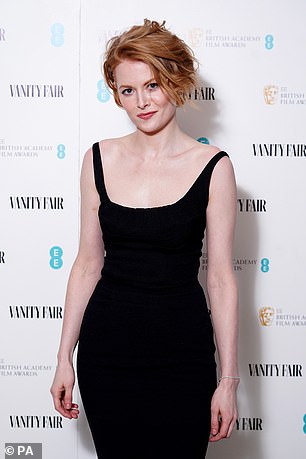 She appears alongside Gary Oldman, giving one of the best performances of his career as Jackson Lamb, a sort of uncouth version of George Smiley.

Meanwhile, Ms Miller has a prestige TV production of her own — Anatomy Of A Scandal — about to launch. The mini-series, which streams on Netflix on April 15, also stars Rupert Friend and Michelle Dockery.

This is the last piece, for my final column.

When David English, the architect of the modern Daily Mail, finally persuaded me to join him, after I’d twice turned down his approaches, he said: give me two years.

Well, my father was a certified accountant, but I clearly didn’t inherit the maths gene.

I got confused. I thought English meant 38. That’s how long we’ve been together, you and I, dear reader.

I won’t go on about all the folks I’ve come across in those 38 years, because that list is longer than my career.

But I have been lucky. Lucky to have met and worked with so many great people. Lucky to have benefited from the kindness of many friends, in and out of this newspaper.

Lucky, too, to have had such devoted readers who, I discovered, are as passionate about theatre, cinema, television and music as I am.

I loved that they didn’t always agree with me. Robert Altman said the best art always divides. I believe that to be true.

I also believe (as did Mrs Wilkinson in Billy Elliot) in the transformative power of art. Though we’re in an age now where culture can also harm.

Someone asked me recently if old TV shows such as Fawlty Towers or Till Death Us Do Part should be amended; with the bits some committee deems offensive excised. NO!

The old must know it; the young must learn it. You can’t censor the past. How do we move forward, as we must, if we can’t comprehend all the light and dark corners of our history?

I am grateful that the Daily Mail decided, early on, just to let me get on with what I do. They, my editors, gave me the tools and the freedom that underpinned my luck.

I could go see a show or a film a dozen times, if I wanted to. And I wanted to. I wanted to know as much about that young artist at the back of the chorus line as the one centre stage.  Having been here so long has allowed me to follow entire careers.

And now I’d better wrap this up, before I run out of luck. You all be lucky, too.

See you along the road.