From a star studded party to a star studded brunch! Barack Obama looked casual and relaxed as he dined al fresco near his Martha’s Vineyard home on Sunday, Aug. 8.

Barack Obama, 60, is having the best birthday weekend ever! Fresh off the former president’s epic, star-studded birthday bash, he headed for a Sunday brunch with none other than Oprah Winfrey. Obama was casual in a button down, blue linen shirt as he dined outdoors at the exclusive Vineyard Havens Country Club with a group of around 20 people per photos obtained by the DailyMail. He added a chic pair of clear sunglasses to his ensemble as he sat in the middle of the table, taking in the views of the stunning waterfront club.

The outing comes just a day after his big birthday bash that included a slew of A-Listers, including Chrissy Teigen, John Legend, Bradley Cooper, Gabrielle Union, and Dwyane Wade just to name a few. Lucky Obama was treated to an extra-special performance by Chrissy, who channeled the late Marilyn Monroe for a performance of “Happy Birthday Mr. President,” right down to the white dress. The iconic was originally performed by Marilyn for President John F. Kennedy at a celebration of his 45th birthday. 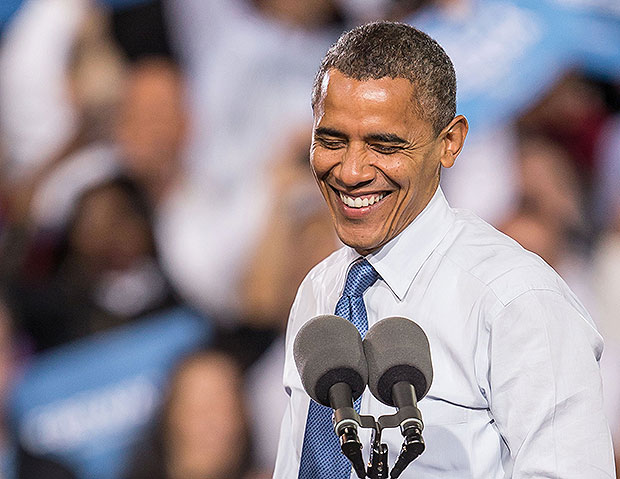 Singer Erykah Badu also shared a number of posts for the bash, which was held at Obama’s $12 million, 29 -acre Massachusetts mansion. In one video, the “Appletree” singer captured Obama ripping it up on the dance floor to some rap music with a mic in his hand.

Obama looked like he was having the time of his life in a floral shirt (perhaps inspired by his home state of Hawaii) along with an oversized beaded necklace. H.E.R. — née Gabriella Sarmiento Wilson — also shared some snaps from the soirée, posing with both Obama and his wife Michelle Obama.

Michelle also took to social media to wish her husband — who is a Leo per the Zodiac charts — a happy birthday! “Of all of your accomplishments, I know that being a present, loving father to our girls tops them all,” she captioned a photo of their family, on Aug. 4, which is his actual birthday. “Thank you for never letting the weight of the world get in the way of being a wonderful husband and father. Happy 60th birthday, @BarackObama!” she added on the photo that included daughters Sasha, 20, and Malia, 23.