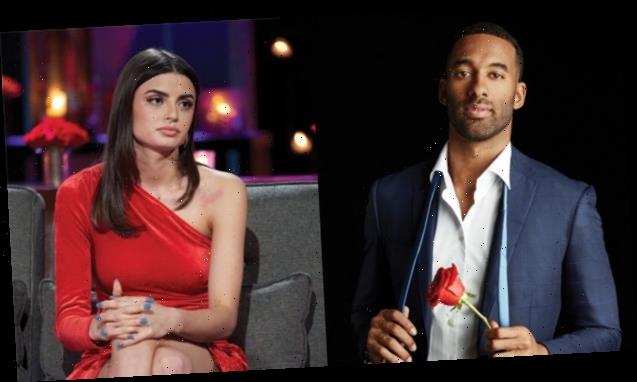 Matt James joked about looking for a ‘therapist’ after revealing his breakup with Rachael Kirkconnell on the ‘After The Final Rose’ special.

Matt James is in the market…for a therapist, not someone to give a rose to. One day after the 29-year-old real estate professional’s season of The Bachelor ended, he appeared to reference the drama that played out on our television screens. “Google…Therapist…Near me,” Matt jokingly tweeted on March 16 (replace the dots with emojis of a hand writing, though).

In case you missed last night’s two-part finale, we have major spoilers ahead: Matt brought the two finalists, Michelle Young and Rachael Kirkconnell, to meet his mother and brother. After a lot of reflecting, Matt ultimately gave his final rose to Rachael…but not a ring. Instead of proposing, he proposed that they just date, and their fairy-tale romance ended with a horse-drawn carriage ride into the sunset.

However, the happy ending was short-lived. During the After The Final Rose special hosted by Emmanuel Acho that aired immediately afterwards, Matt revealed that he and Rachael split. Since the finale was filmed, Rachael found herself in the middle of a racism scandal after photos of the 24-year-old graphic designer attending an Old South Antebellum-themed college party in 2018 surfaced, among other allegations. Matt explained how this controversy affected him and his view on their relationship.

“When I questioned our relationship, it was in the context of you not fully understanding my Blackness and what it means to be a Black man in America. It broke my heart because this is the last conversation I thought we’d be having. I didn’t sign up to have this conversation,” Matt told Rachael during the After The Final Rose special. Meanwhile, Rachael denounced her decision to attend such a party, saying, “I see someone who was living in this ignorance, without thinking who it might be hurting.”

After the finale aired, Matt went on Good Morning America and admitted that he wished he had more “conversations” about race on The Bachelor. “I think that a lot of time spent during filming and having those conversations [about race] was amongst the women of color. I think we could’ve had those conversations amongst the white women who were there, as well. Hindsight is 20/20, but I probably should’ve asked more clarifying questions,” The Bachelor lead said on the talk show.

Rachael expressed her regret that their relationship ended on the very same day the finale aired. “I knew from the first night i met matt that he was something special, and i was praying to share something exceptional between the two of us if that’s what was meant to be,” she wrote amid a long Instagram post.

“While i never expected this outcome, i respect his decision completely,” Rachael continued. “Of course i wish circumstances were different, but i still feel blessed for the time we did have together and the memories we made. i got to fall in love, and i truly believe he was the love of my life. he will always hold a piece of my heart. i’ll always be hopeful and believe what’s meant to be will be.” The Bachelor finalist also issued an apology for her “offensive” and “racist” actions in a statement shared on Feb. 11 while her and Matt’s season of The Bachelor was playing out.