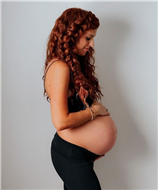 Audrey Roloff has a blessed cause for celebration at the moment.

But she also admits that she now has cause for concern, too.

The former Little People, Big World is pregnant with her third child and is due next month, as Audrey and Jeremy excitedly told fans and followers in early July.

Audrey is obviously looking forward to becoming a mother once again.

But she also just posted on Instagram that something feels off with this pregnancy — and it’s something to which she can unfortunately relate, due to her past.

“To me baby feels very low also my symphysis pubis dysfunction that came on with Bode around 8 months started much earlier with this babe,” Audrey shared on Tuesday, referencing her second child and adding:

“Hoping it stays manageable during these final weeks and it’s not horrible postpartum.”

It is a group of symptoms that can cause discomfort in the pelvic region and it typically occurs during pregnancy, when a woman’s pelvic joints become stiff or move unevenly.

It can occur both at the front and back of one’s pelvis, affecting only the mother and not, thankfully, the baby.

During her pregnancy with latter, and the months that followed his birth in January 2020, the author experienced SPD.

She mentioned at the time that merely walking around the farm was challenging in the weeks afterr giving birth to her son, which is why she’s been taking regular visits to the chiropractor during this third pregnancy.

On top of the pain she was experiencing due to SPD, the soon-to-be mother of three revealed in February 2020 that she had contracted mastitis four times.

“You could say I’m a professional at fighting this beast now,” Audrey wrote on her Instagram Stories at the time.

As outlined by WebMD, Mastitis is an inflammation of the breast that is caused by a blocked milk duct or bacteria entering the breast causing an infection.

This, in turn, doesn’t just create physical discomfort for the mother; it creates issues with providing sustenance for one’s baby, which is a parent’s worst nightmare.

Audrey, however, is trying to remain positive.

Finally took a few pics of the bump. 34ish weeks with this precious mystery babe that we cannot wait to meet. To Ember, you are “baby sister” already…but mama thinks there is another little boy in there.