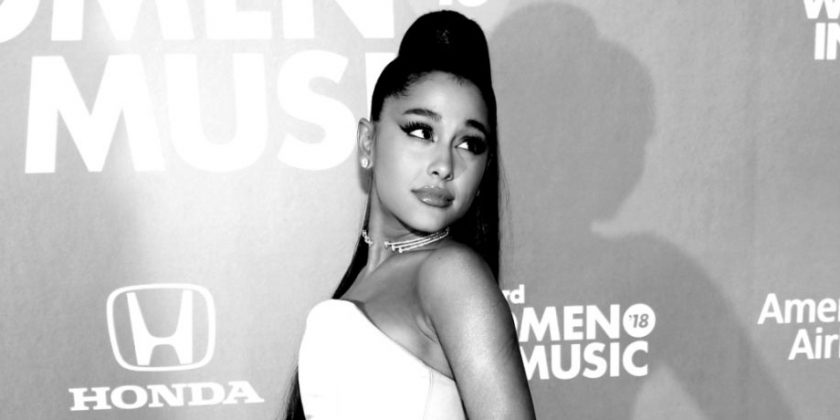 Pop starlet Ariana Grande is perhaps the hottest singer on the planet right now — both in terms of her broader popularity and in terms of her world-famous beauty. Hot off of the release of her latest single, the much-anticipated “7 Rings,” Ariana Grande has gone on a bit of an Instagram spree today, sharing a number of pictures both sexy and silly.

In her most recent Instagram image, Ariana can be seen in partial profile, with the photographic frame tightly cropped about her. Her chest is featured prominently in the snapshot, an extremely tight and skimpy top pressing her cleavage into the spotlight. Dramatic lighting and a black and white finish only serve to further emphasize both Ariana Grande’s face and her body, with the black garment blending into the shadows. There is a mysterious effect taking place next to her ear, which looks like it may have been added in post-production.

With glitter smeared over her cheek and her collarbone, as well as with pitch black makeup applied generously both to her lips and her eyes, it’s clear that Ariana Grande and her stylist were going for a high-contrast, surrealistic aesthetic. The “Thank U, Next” singer keeps her lips parted in a breathy pout, closes her eyes in a sensual expression, and wears her signature raven locks long and straight.

Despite having been posted less than an hour ago, as of the writing of this article, Ariana Grande’s most recent Instagram share has already attracted an large amount of attention. More than 600,000 of her most ardent admirers left a like in response to the black and white glam shot, while over 7,000 users took the time to leave her a message in the comments section.

One star-struck fan wrote, “you are such a dream to me,” followed by two spinning heart emojis. A second follower quipped, “Your feed right now is my aesthetic.”

Ariana Grande made headlines most recently for paying tribute to her late ex-boyfriend, rapper Mac Miller. According to Elle, the pop singer took the time to pen a brief note to Mac Miller on what would have been his 27th birthday.

Writing simply, “Miss u,” and taking the time to post some curated pictures of the deceased rap artist, it looks like Ariana was certainly thinking about Mac Miller — and of a world without him in it — on such a sombre day.

Despite the tragedy, the “God is a woman” singer seems to be in high spirits lately — perhaps understandably so, given that she continues to release hit song after hit song, bolstering an already strong career.