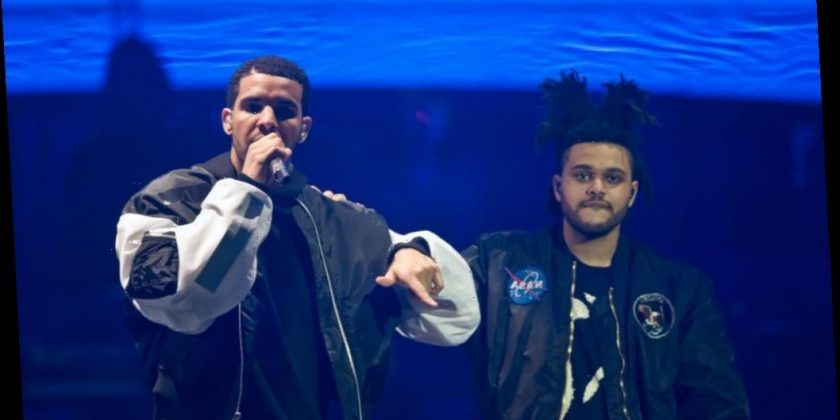 Drake is arguably the top tastemaker in music. Not only is he credited for helping shift and define the sound of mainstream hip hop and R&B, but he also brought attention to a coterie of artists that continue to thrive today.

One notable person he lent a hand to is The Weeknd, helping boost his career in the early 2010s with various plugs and musical collaborations. But shortly after, things turned sour. But what about now? Are The Weeknd and Drake still feuding?

How The Weeknd’s relationship with Drake started

According to Distractify, their relationship started to develop in 2010 when Drake spotlighted some of The Weeknd’s music on his website. They reportedly met the following year at one of The Weeknd’s shows, where Drake approached him about possibly working on music together. They would eventually team up for “Crew Love” — a song on Drake’s Grammy-winning sophomore album, Take Care (2011).

Speaking to Complex, The Weeknd revealed he actually did “Crew Love” and several other songs from the album for himself, but apparently Drake loved them so much, he wanted them for Take Care. “I was like, “Dude, take anything.” At that point I was like, “Hell, yeah,” he shared.

As The Weeknd’s career blossomed, many people expected him to sign to Drake’s OVO label. But instead, he entered a deal in 2012 with Republic Records.

The move kicked up rumors of a feud, which The Weeknd denied to Complex. However, Drake posted this tweet that fans viewed as a thinly veiled shot at the House of Balloons hitmaker.

Eventually, the speculation died down, but only for a short while. By 2015, there were more rumors of a feud due to an interview The Weeknd did regarding his past work with Drake. While he said he would “always be thankful” for the “Hotline Bling” hitmaker, he seemed regretful that he’d passed along so many songs for Take Care.

“I gave up almost half of my album,” he told Rolling Stone. “It’s hard. I will always be thankful—if it wasn’t for the light he shined on me, who knows where I’d be. And everything happens for a reason. You never know what I would say if this success wasn’t in front of me now.”

It also didn’t help that Drake was linked to The Weeknd’s on-off girlfriend Bella Hadid in 2017 when they were broken up, according to Us Weekly. The Weeknd did not directly respond to the dating speculation, but he seemed to take a shot at Drake on “Lost In The Fire” over Drake’s secret son, Adonis, whom he shares with former adult film star Sophie Brussaux.

Drake didn’t address the rumored zinger, but he later confirmed there was tension between him and The Weeknd at a point.

However, he said he and The Weeknd had patched things up

Rapping in his 2019 song “War,” Drake said he and The Weeknd were able to talk out their issues. “And the boy that sound like he sang on Thriller/You know that’s been my [N-word], yeah/We just had to fix things, family, 6 tings, we can’t split up.”

He also clarified in an interview with Rap Radar later that year that he was never upset over The Weeknd’s decision not to sign with his label. But he did admit: “My biggest regret would maybe be that we wasted seven years not communicating with each other when we had something beautiful going on.”

We’re sure fans agree. But at least they seem to be in a better place now.