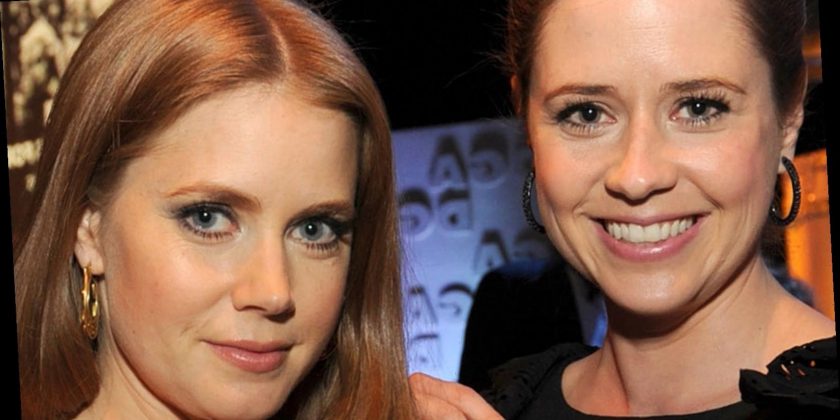 Back in 2019, The Office star Jenna Fischer was encouraged by former co-star Rainn Wilson (who portrayed Dwight Schrute in the hit NBC comedy) to Google herself (via Dankanator). When doing so, Fischer (otherwise known as Dunder Mifflin receptionist Pam Beesly) stumbled upon some of the most popular search terms relating to her name, including “is Jenna Fischer married,” “is Jenna Fischer Canadian,” and “is Jenna Fischer related to Amy Adams.”

Upon the discovery, the actress took to Instagram to clarify some of the most Googled questions about her life off-screen, including whether or not she is in fact related to the Enchanted star.

“Inspired by @rainnwilson to google myself and answer the top search questions…Yes I am married. And, I’m still married….to Lee Kirk not John Krasinski. In fact, our 10 year anniversary is next year! I love you Lee!! I am not related to Isla Fisher, Carrie Fisher, Amy Fisher or Debbie Reynolds.” Speaking on Instagram, Fischer continued, “I am not related to Amy Adams but she is a lovely human being and would love if she were my sis. I am not Canadian.”

Although not related, the pair have worked together in the past. As Mashable reports, Office fans might remember Adams as Katy, a character who appeared in the final episode of the show’s first-ever season, titled “Hot Girl,” which originally aired all the way back in April 2005.

Speaking on the Office Ladies podcast, former co-stars Jenna Fischer and Angela Kinsey (who played Angela Martin in the series) discussed Amy Adams’ brief appearance on The Office, revealing that she was cast in the show before making it big in Hollywood. “Amy Adams was Purse Girl, this is who [Mindy Kaling] wanted to cast as the purse girl from her audition, but something that I think people don’t realize is that Amy Adams wasn’t Amy Adams when she was cast as the purse girl. She became Amy Adams later,” Fischer explained.

Speaking on the podcast, the co-stars went on to reveal that The Office writers were keen on Adams’ return to the show. However, by the time the episode had aired, Adams was nominated for an Academy Award for her performance in the film Junebug. “By then she was Academy Award-nominated Amy Adams… I was like, I hope we can get her back! And we did, she came back for two more episodes,” Fischer revealed.