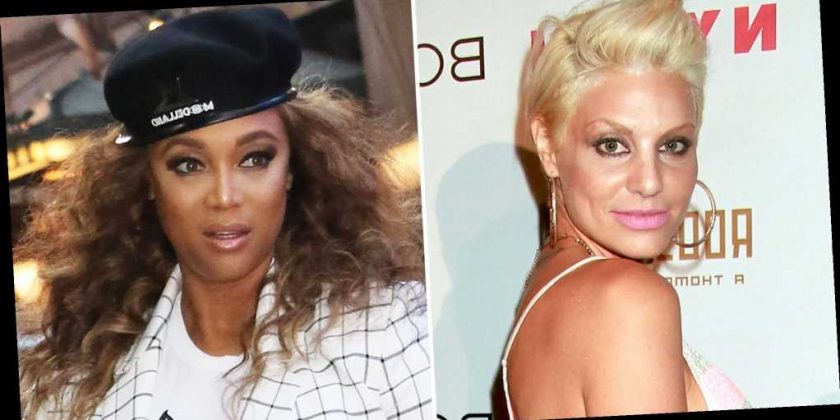 America’s Next Top Model alum Lisa D’Amato has a request for Tyra Banks more than a decade after her appearance on the show.

Everything Tyra Banks Has Said About Hosting ‘Dancing With the Stars’

On Thursday, January 28, the 40-year-old posted an Instagram video asking the supermodel to address the pain she caused her and other contestants on the competition series. She accused Banks, 47, and others working on the show of mistreatment and using her personal struggles against her.

“This message is for Tyra Banks. Remember me? Hi. Lisa. Remember when I had an opportunity to ask you one question in season 5 — a modeling question — and I came in and asked you a question that wasn’t about modeling and you kicked me out?” D’Amato said in the clip. “Can I get that question back?”

The California native claimed she risked being sued for breach of contract by opening up about her experience on America’s Next Top Model in an episode of E! True Hollywood Story years prior.

“I did it knowing that this was a breach of contract, still, because I felt like it was my duty to warn other girls that were going to audition for America’s Next Top Model to know that what you guys do and the way that you guys would poke me and use my childhood trauma against me, day in and day out,” she said through tears.

D’Amato added, “It was just so f–ked up, and it broke my heart. Like, how could you do that?”

“You, Tyra, you knew very well the horrible trauma that my mom inflicted on me, and you also talk so much about how you wouldn’t be where you are without your mother and how powerful she is. So knowing that, you still did that to me and continued to do it to other girls, even after I spoke publicly about it,” she alleged.

D’Amato is one of many women to come forward about negative experiences on ANTM. Jeana Turner and Angelea Preston — both featured in the reality TV personality’s video — have spoken out in the past. Turner, for her part, came forward in a 2019 YouTube video claiming contestants weren’t allowed to eat or leave their rooms without permission from producers or security team members. Preston detailed her experience in a 2015 interview with the Daily Mail.

“It’s insane, the amount of bulls–t that me and the other girls went through,” she said at the time. “There are times when we didn’t get fed. We had to film straight through, 15, 18 hours without eating.”

Banks came under fire on social media in May 2020 for alleged problematic behavior on the show, including a “bi-racial” photoshoot that put contestants in blackface, asking a competitor to fix the gap in her teeth and having a contestant do a graveyard photoshoot after the death of a friend. She addressed fans’ concerns in a tweet that same month.

“Been seeing the posts about the insensitivity of some past ANTM moments and I agree with you. Looking back, those were some really off choices. Appreciate your honest feedback and am sending you so much love and virtual hugs,” she wrote at the time.

D’Amato finished in sixth place on season 5 of the competition series, but returned for season 17’s all-stars cycle and won.