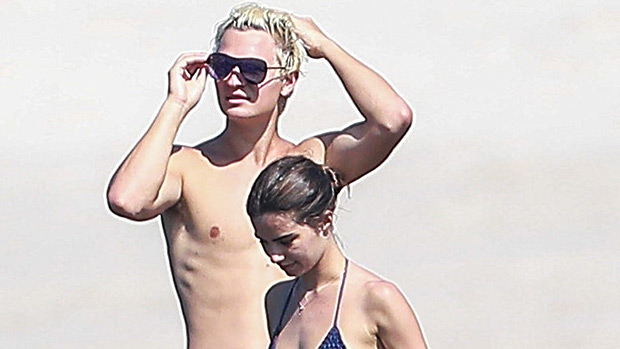 Ansel Elgort and his girlfriend, Violetta Komyshan, were quite the affectionate couple on Jan. 20, when they spent some time in the sun on a beach in Mexico.

Ansel Elgort, 24, showed off his new bleach blonde hair makeover and a toned body on Jan. 20, when he flaunted some major PDA with girlfriend, Violetta Komyshan on a beach in Mexico. The adorable couple, who are high school sweethearts, proved they’re happier than ever together when they stopped for kisses and hugs as they walked along rocks near the water during the getaway. Ansel wore some red trunks for the outing, while Violetta looked amazing in a navy blue bikini.

Ansel and Violetta have been together for an impressive seven years! The duo met at Fiorello H. LaGuardia School in New York and have been going strong ever since, so it’s no surprise that they would still be enjoying each other’s company to this day. Although Ansel’s been lucky enough to continue a successful acting career, it hasn’t stopped his romance from continuing, and it looks like his heart is still with Violetta no matter how many roles he takes on!

In addition to making headlines with his active romance, Ansel has been getting exposure for being cast as Tony in Steven Spielberg‘s upcoming version of the Broadway musical, West Side Story. Filming for the movie is not set to begin until the summer of 2019, but we’re already excited about it! Since Ansel has definitely taken on some incredible versatile roles in the past, we’re pretty sure he’s going to make this latest one truly memorable!

It’s always great to see Ansel acting or just taking in the finer moments in life. We look forward to more from him in the new year!