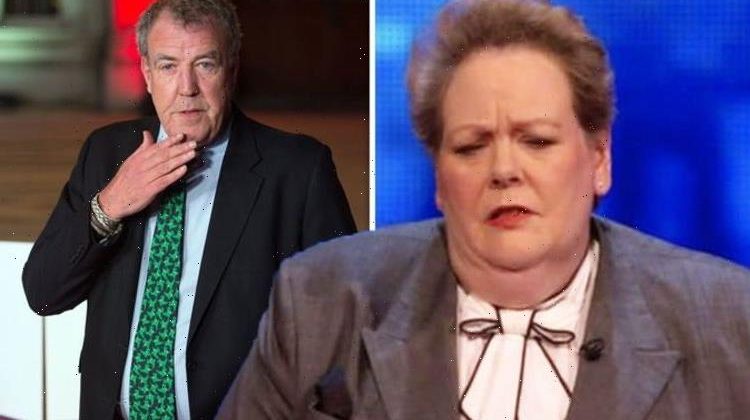 Anne Hegerty, who is otherwise known as The Governess, has been a regular on The Chase for the past decade. The quizzing expert has reacted to Jeremy Clarkson after the former Top Gear presenter revealed he has no idea who she is.

The Who Wants to Be a Millionaire host made the confession after being put on the spot by contestant Archit Israni.

Anne has since reacted to his comment after The Grand Tour presenter was quizzed about his admission on Twitter.

The person in question wrote: “@JeremyClarkson Never heard of Anne Hegerty!?!?! Thought it was worth a smug laugh?”

In view of his 7.4 million followers, Jeremy replied: “I really hadn’t. Or the other chap.”

“He’s probably far too busy to watch either The Chase or Britain’s Brightest Family!” the Governess said, in view of her 152,000 followers.

Anne added: “Big fan, though, Jeremy, love to meet you!”

It comes after a recent episode of Who Wants to Be a Millionaire, where the contestant required Jeremy’s help.

The financial consultant was asked: “Since 2016, who has hosted the TV game show that requires teams of five to name items in top 10 lists?”

Viewers were left shocked after Jeremy admitted he had no clue who The Chase quizmaster was.

Jeremy also was confused to see Good Morning Britain’s Adil on the list – and he didn’t know him, either.

He said: “I’ve never even heard of two of the people in this list – Adil Ray and Anne Hegerty.”

Viewers were stunned by Jeremy’s confession that he had never heard of the two TV personalities.

Another tweeted: “Jeremy Clarkson has never heard of Anne Hegerty!”

“I swear I’ve never screamed at the TV so much in my life than #whowantstobeamillionaire tonight,” a fourth commented.

Anne, best known as The Governess on The Chase, has been on screens for over 10 years.

She also fronts her own solo show Britain’s Brightest Family.

The Chase airs weekdays on ITV at 5pm.