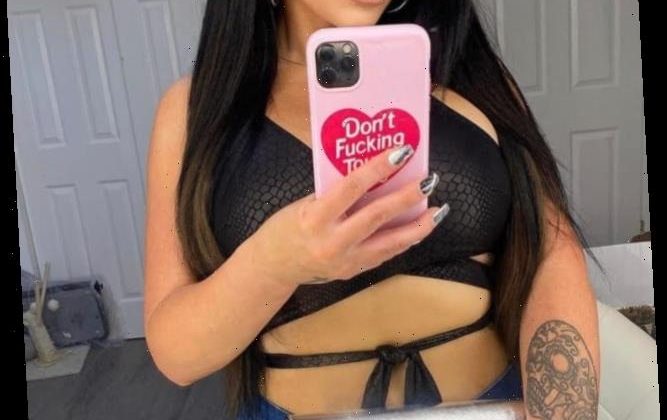 As we discussed earlier this week, Sammi Giancola is still rich despite the fact that she parted ways with the Jersey Shore franchise several years ago.

In the opposite position is Angelina Pivarnick, who barely participated in the original Shore, and is now stacking funds by appearing in every episode of the show’s Family Vacation iteration.

Of course, Angelina is new to being rich, which means she’s a lot of ground to make up in order to catch up to her co-stars.

She bought a house shortly after she married Chris Larangeira last year, but it’s not quite as baller as the palatial pads enjoyed by the rest of the crew.

And we’re sure she owns some kind of expensive foreign car, but she’s a long way from collecting Lamborghinis like Pauly D.

And now, fans are curious about the value of her face.

Yes, one of the biggest ways in which Angelina has flaunted her newfound wealth is by using cosmetic procedures to alter her appearance.

All the ladies of Jersey Shore have done it.

In fact you’d be hard-pressed to find a female star of any long-running reality show that hasn’t had the occasional touch up injection.

Angelina has taken it much further than that, of course, as subtlety doesn’t play much of a role in the guidette lifestyle.

So what exactly has she had done?

Well, just about everything.

Over the course of her slow transformation into Kim Kardashian, Angelina has gotten butt implants, and breast implants, and she’s undergone countless procedures to alter the appearance of her face.

We question if Angelina really got her money’s worth, as she doesn’t look all that different than she did during her early days on Shore.

And exactly how much did she spend on all that work?

Well, according to a new report from Screen Rant, Angelina spent over $21,000 just on her face.

That’s a pretty precise figure, but it’s unclear how exactly the outlet arrived at it.

Is that the cost of what Angelina’s nose job, jaw reshaping, etc. would have cost a normal person?

Because based on the number of shout-outs she gives her plastic surgeon on Instagram, we think it’s safe to say she gets some pretty major discounts.

In fact, much of the work Angelina has undergone was probably performed for free in exchange for her social media endorsement.

After all, Pivarnick has more than 1 million Instagram followers, and it’s not easy to draw that many eyes to an ad for a local plastic surgeon.

That sounds like a massive following, obviously, but it’s yet another area in which Angelina has a good deal of catching up to do.

To put things in perspective, Nicole “Snooki” Polizzi — arguably the most popular star of Shore — has over 13 million followers.

Of course Angelina might be the reason Snooki quit the show, so we suppose she won that battle.