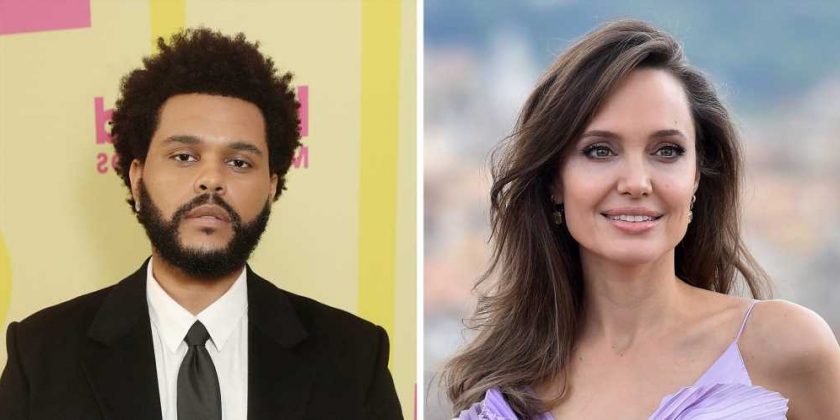 Unlikely pairing Angelina Jolie and The Weeknd (real name: Abel Tesfaye) are sparking romance rumors once again. The two were spotted at the same private concert over the weekend. Photographs emerged on social media of the two attending Mustafa's private concert, though the actress sat with daughters Shiloh, 15, and Zahara, 16, and The Weeknd sat with friends. A fan account for the "Save Your Tears" singer shared shots of the latest possible Hollywood coupling at the concert in their respective viewing areas. Although they were both in attendance at the event, they were not photographed together. Could it have been a secret rendezvous or just a coincidence? Given that this is the year of unlikely celeb couples, nothing is truly impossible.

The duo was also spotted out at the beginning of the month at Los Angeles restaurant Giorgio Baldi, where they spent hours hanging out before leaving separately. A source told Page Six that it didn't appear that they were trying to keep the meeting a secret. "They're clearly not trying to hide [the dinner date]," they said.

It's still unclear what the purpose of the little get together was. The Weeknd appears to be expanding his horizons and breaking into TV, so perhaps it was more of a networking date? The singer will be starring and co-producing a new series for HBO Max called The Idol, which chronicles a female singer who falls in love with a club promoter in L.A. before realizing he is in a cult. He also appeared alongside Adam Sandler in Uncut Gems, and wrote an episode of American Dad last year.

Time will only tell if this is a budding relationship or more of a friendship/mentorship. The two are not known to be friends, but The Weeknd has referenced her pout in one of his songs and is said to have "made no secret of the fact he has a huge crush on her," according to source for The Sun.