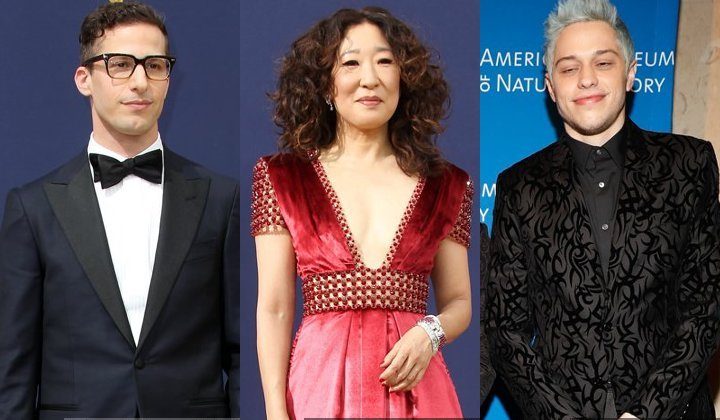 AceShowbiz –Pete Davidson continues to receive support and love from fellow celebrities after he opened up about his mental health issue. The latest ones to do so were 2019 Golden Globes hosts Andy Samberg and Sandra Oh, who urged people to mind their own business rather than bothering the “Saturday Night Live” star.

In an interview with The Hollywood Reporter, Andy opened up about his time on the long-running comedy show and how it’s now much different than his era thanks to social media. “I think they’re doing a great job and still cranking out really funny stuff,” he said, recalling the time he did a sketch about Twitter with Ashton Kutcher. “We did a sketch that ended up getting cut, but it was about Twitter ’cause that was the new thing, Twitter, that Ashton Kutcher is known for.”

He added, “And now it’s such a given that everyone is on it all the time.”

Shifting the topic to Pete, the 40-year-old star had nothing but good words about the 25-year-old. “Pete is hilarious, and the times I’ve interacted with him, he is such a sweet guy,” Andy noted. “But he’s going through some personal stuff, and there’s no way to live privately now. It’s got to make it harder.”

Pete caused concern after he shared a seemingly suicide note late last year. “I really don’t want to be on this earth anymore. I’m doing my best to stay here for you but you I actually don’t know how much longer I can last,” the “Big Time Adolescence” star said. “All I’ve tried to do was help people. Just remember I told you so.” He then deleted his account.