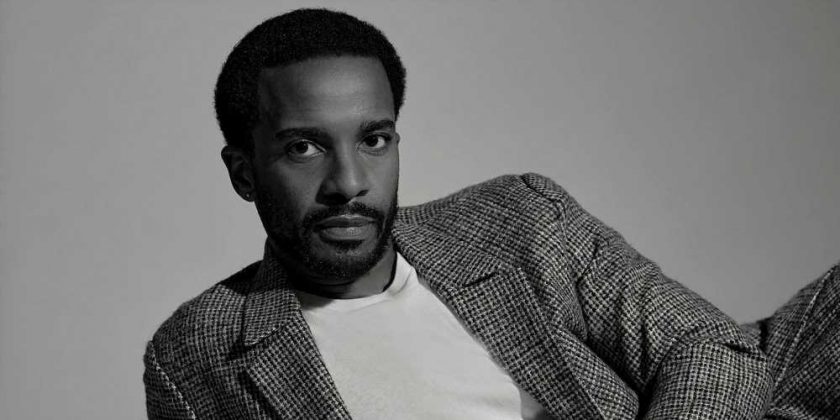 The camera simply loves André Holland's face, whether that camera takes the form of Barry Jenkins's Moonlight close-ups or the front-facing camera of an iPhone.

Holland and I are meeting over Zoom, a virtual interview planned because we live on opposite coasts of the U.S. Not planned, however, was Holland's schedule taking on a life of its own. Amid a stacked press tour for his latest film, Passing, the actor has been hopping from New York to London to L.A. and back, with late meetings that forced him to log onto Zoom from the back of a car between appointments — an unforeseen circumstance he could not be more apologetic for, giving me his personal email in case the conversation ends up being insufficient ("literally, I can give you my number and we can talk anytime").

The setting, however, does nothing to dampen Holland's presence and ability to be engaging, all with a glow that no one should have while traversing Brooklyn during rush hour. Interviews like these can be awkward without taking place mid-commute, but Holland is so affable and in-the-moment that even here he doesn't come off contrived. That his face seems preternaturally suited for the camera is perhaps a curious thing, considering that his first love was theater. When Holland was around 15 or 16 years old, his mother took him and his sisters to the Alabama Shakespeare Festival to see a performance of August Wilson's play, The Piano Lesson, a formative experience he's never forgotten.

"I was astonished because, to that point, I had never imagined that people who looked like me and spoke like me, and the people I grew up around in Alabama, could be on important stages like that," the Bessemer, AL. native says. "Seeing that story be told made me feel like, 'Oh, I want to do that.'"

To hear Holland describe it, he discovered acting by chance, and has been "stumbling forward ever since," but his filmography has been anything but accidental. The 41-year-old actor has been intentional when it comes to taking on roles, resulting in a KonMari'd CV that's as interesting as it is unpredictable, ranging from Stephen King horror (Hulu's Castle Rock) to historical drama (Selma). Perhaps not so coincidentally, Holland has been in two Broadway plays both written by August Wilson: a 2017 production of Jitney and a 2009 staging of Joe Turner's Come and Gone.

"When I'm reading something, first of all, I want to make sure that it doesn't do anything that denigrates my culture," he says. He has other questions, of course: is it a project that moves him, something that gives him an opportunity to do things he hasn't before? Does he believe in the people he's working with, and in their vision enough to work with them for 12 to 14 hours a day? But at the end of the day, it comes back to his main priority.

"After I've gone through all of that, I come back and revisit the question of, is there anything here that denigrates my culture?" he says. "I was just reading this book today called Colorization by Wil Haygood, which is about the history of Black people in Hollywood, and the first chapter is about D.W. Griffith and [the 1915 silent film] The Birth of a Nation, and the damage that film did to Black people. And so I just want to make sure that we're telling stories that highlight the beauty, the complexity, the joy, the anger — all of the things that we are — but in a real, actual way." To that end, Passing, based on Nella Larson's 1929 novel of the same name, ticked essentially every item on Holland's list. The Netflix film out Nov. 10 follows Irene (Tessa Thompson) and Clare (Ruth Negga), two light-skinned Black women in 1920s Harlem, the latter of whom has chosen to live and "pass" as a white woman.

Holland says that having grown up in the South, he was familiar with the idea of passing, and heard stories from his parents and grandparents about people they knew who had passed. As Brian, Irene's husband, he enlivens the screen opposite Thompson, their chemistry coming to a head in a scene in which Brian and Irene argue over whether or not to talk to their children about the dangers of the racial discrimination they're bound to face.

The film is actress Rebecca Hall's directorial debut, and Holland says the experience of working with her in this new capacity was revelatory for him: "Seeing her on set as a writer and as a director revealed to me that I also have an appetite to write and direct my own stories," he says. "Seeing her in action made me think, 'OK, not only can I do this, but I also feel like I have to do this.'" Holland already has experience working behind the scenes, having produced High Flying Bird, the 2019 sports drama he also starred in. Through his production company, Harper Road Films, he's working on over a dozen different projects, one of which he's directing, and a slew that he's slated to star in as well.

"Storytelling was a part of my tradition growing up, I love stories maybe more than acting," he explains. "Producing, I think, has made me feel as though I have more agency over the kinds of stories that I want to tell. It's given me the opportunity to learn things about history and about culture that I didn't know before. It's been really, really thrilling."

Holland hopes to elevate stories he believes in, and to make space for new voices to come in. He talks excitedly about a meeting he had earlier in the day with a writer, telling me, "This amazing brother was a scholar, teaches African American history, and we were just kind of riffing on all the story ideas we both have and realizing there are so many stories in our community, in our culture, that are yet to be told, you know what I'm saying?"

In a sense, he's now in the position of opening doors for others the way Moonlight did for him. The Oscar-winning film, he says, allowed him to meet filmmakers he thinks he otherwise wouldn't have met, and to be sent scripts and opportunities he remains grateful for.

"Moonlight made me feel hungry to have more experiences like that, where you make something that feels important, relevant, that has something to say," he says. "But the truth is that projects like those don't come along every day, you know? In some ways, there was a little bit of disappointment, I think, on my part, just because I had such a wonderful time working on Moonlight and I wanted to recreate that experience."

Moonlight made me feel hungry to have more experiences like that, where you make something that feels important, relevant, that has something to say.

He might have that chance now that he's re-teamed with Barry Jenkins for a new follow-up season of The Knick, which the Moonlight director is picking up from the series' previous director, Steven Soderbergh. But otherwise, Holland is taking things into his own hands.

"That's where producing feels like a lifeline because it's like, well, maybe rather than waiting for something like [Moonlight] to come along again, what about getting in there and trying to figure out a way to make those things happen, to put those projects together?" he says. "So that makes me feel a little less anxious and yeah, it makes me feel excited."

Read on as Holland discusses his favorite Hollywood Chris, the slogan he'd steal from Shirley Chisholm, and why he refuses to indulge pickup lines.

Who is your celebrity crush?

What is the last thing you do before you fall asleep?

On good days, meditate. On bad days, forget to turn off the TV and fall asleep in my contact lenses. Who is your favorite villain?

What was the first album you owned?

I think it would have been either the Dead Presidents soundtrack, which was ice cold, or Rent the musical, which I was obsessed with.

Do you have a favorite cheesy pickup line?

Nah. You know what? I'm grown, I stay away from the pickup lines. [Laughs.]

Fair enough. If you were required to spend a thousand dollars today, what would you buy and why?

Oh man, really good question. I would probably book a table at a cute, cozy neighborhood restaurant and invite all my favorite people to come and eat, drink, and talk to each other.

If you ran for office, what would your slogan be?

I'd steal from Shirley Chisholm: "Unbought and unbossed."

Name one place you've never been, but have always wanted to go to.

So many places. The first that comes to mind is Dakar, Senegal.

Is there an outfit you regret wearing?

[Pause] Nah, I feel pretty good about my choices so far. Yeah, yeah. I think so. You had some great outfits as Algernon on The Knick.

I love those clothes. Love. That was one of my favorite parts about the show, was seeing what they were going to dress me in for each episode.

Do you have a favorite Hollywood Chris?

They're all great, but Chris Pine, I think, is my favorite. I just love his acting. I feel like everything I've seen him in, there's something about him. He's dope. He's a theater guy too, so I think maybe that's part of what it is that I feel. I'd love to work with him one day. Also, he seems to be a vintage car guy, as am I.

Do you own a car in New York?

I have a car in New York, but not a vintage one. I just have a regular car to get around in, but I have a '69 Porsche that I have back home that I like to tinker with.

When was the last time you cried?

Probably sometime in this last week. I tend to cry often and I'm proud of that.

Do you remember why? What is your favorite bagel?

You know, I'm going to give an unpopular answer here. I do not mess with bagels. I don't understand bagels. They're so big, so dense! I'm like, "What is this?" I mean, I know that they're popular and people love them. At the place around the corner, people will be lining up to get bagels, but I'm like, "It's not my jam."

Passing is currently playing in theaters and streaming on Netflix.