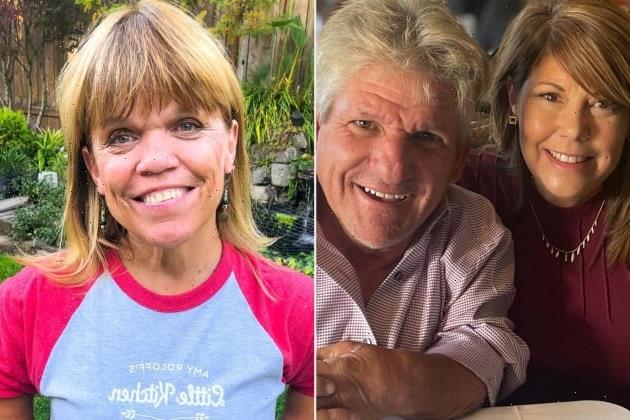 Amy Roloff is out, folks.

Not that there’s anything for her to be in for.

Not just yet at least.

The Little People, Big World star still wants to make it clear, however…

… whenever her ex-husbandd gets engaged to Caryn Chandler?

… and then whenever the couple actually goes ahead and gets married?

… she won’t be in attendance.

“I would prefer not to,” the mother of four admitted in a recent conversation with Us Weekly when asked about attending Matt’s nuptials.

To be clear, Matt and Caryn don’t have a wedding date set.

Heck, they aren’t even engaged just yet.

However, Matt has hinted on numerous occasions that the question will be popped in the near future.

Many TLC viewers think he may propose at some point on the current season of Little People, Big World, leading to a televised wedding on the following season.

And when that does almost definitely happen?

“We won’t be invited to the wedding,” Chris Marek chimed in when speaking to Us Weekly on the same topic, adding of Matt and Caryn:

“They’ve already said that when they do it, it’s going to be a small deal.

“I certainly wouldn’t expect it.”

Amy and Marek got married in August 2021.

They didn’t invite Matt and/or Caryn to the event, but Matt did provide his farm as a location for his ex-wife’s big day.

The former spouses have been on amicable terms ever since their 2016 divorce, although tension has arisen of late.

Just last month, Matt announced he was putting 16 acres of this same farm up for sale, angering son Zach in the process, who responded to his father’s explanation behind the sale by slamming Matt as cowardly.

It was a shocking rebuke.

For her part, Amy has weighed in on this feud by hurling a bit of her own shade in Matt’s direction.

“I don’t know a lot of the details of the negotiation that went on between Zach and Matt,” Amy has said about ongoing feud between her son andd her ex.

“I’m just sad that it’s come to this.

“Parts of me are not exactly surprised because I’ve dealt with Matt over the years and he can be tough. He can be grinding.”

Yes, Amy acknowledged, this is a business transaction and Matt deserves to make a profit, but…

“Matt is still the father, still ‘the adult.’

“I don’t care how old your kids are, sometimes there are things they may need to learn.

“But you know as an adult, as a father, you may need to take the higher road.”

Noting that, over the years, Matt has stressed the farm was going to be a “legacy” for the family, Amy tried to conclude on a positive note.

Especially now that Zach has moved on and literally moved to Washington.

“Change happens, it’s not always happy, but eventually,” she said.

“Maybe this will be a step where we can all move forward, and see how we can all come back together.”