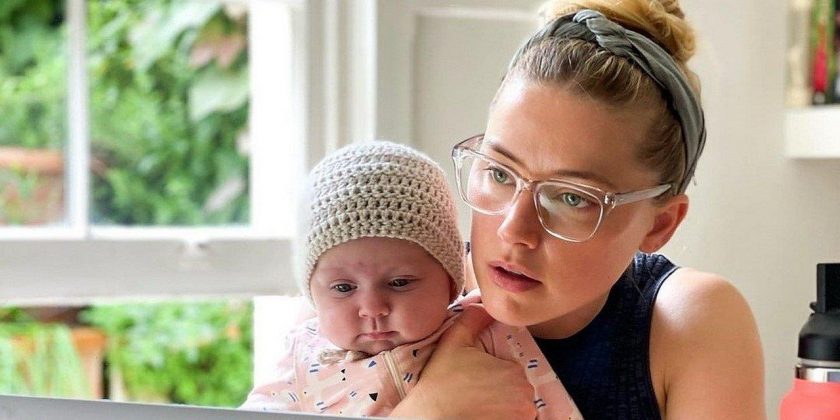 The ‘Aquaman’ actress calls herself ‘the mom and the dad’ and her newborn baby girl ‘the boss’ as she offers a glimpse of her new life as a single mother in a new picture with the infant.

AceShowbiz -Actress Amber Heard is fully embracing life as both mother and father to her newborn daughter after welcoming her first child via a surrogate.

The “Aquaman” star stunned fans at the start of July (21) when she revealed she had started her own family as she introduced her baby girl, Oonagh Paige Heard, who was born in April.

On Friday (16Jul21), Heard posted a sweet shot of herself holding the three-month-old tot as she worked at a laptop.

The Instagram image was captioned, “I’m just the mom and the dad. She’s the boss.”

At the time of her surprise baby news, Heard, who is single, explained she had been working on her parenthood dreams for a few years, insisting, “I wanted to do it on my own terms.”

She continued, “I now appreciate how radical it is for us as women to think about one of the most fundamental parts of our destinies in this way. I hope we arrive at a point in which it’s normalized to not want a ring in order to have a crib.”

Johnny Depp‘s ex-wife went on to add, “My daughter was born on April 8, 2021. Her name is Oonagh Paige Heard. She’s the beginning of the rest of my life.”

The little girl’s middle name is a tribute to Amber’s late mother, Paige.

The actress initially wanted to keep her personal life private and only introduced her baby to avoid news leak. “A part of me wants to uphold that my private life is none of anyone’s business,” so she explained. “I also get that the nature of my job compels me to take control of this.”