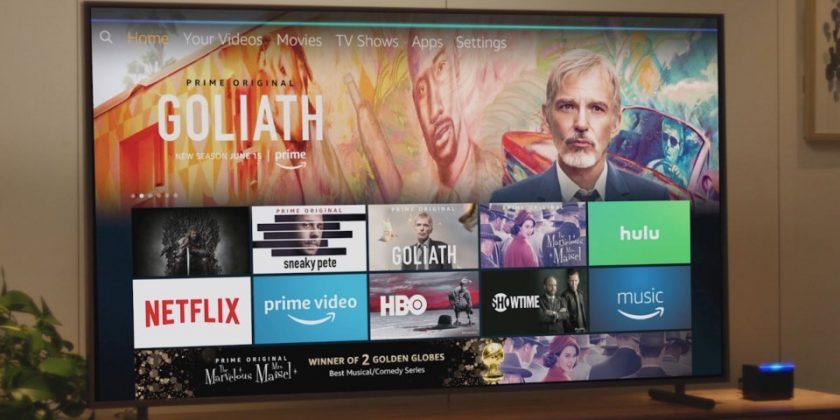 The rise in premium, ad-free video services like Netflix and HBOhas some marketers worried that they won’t be able to find enough high-income consumers. Amazon says that its audience bucks that trend.

According to a recent pitch deck that Amazon has been using to pitch OTT ads to advertisers, Amazon viewers are lucrative. 80% of consumers who own an Amazon Fire TV device are Prime members, showed one slide in the pitch deck, citing internal numbers. The slide also cites research from eMarketer finding that Fire TV owners are more likely to have a household income of more than $100,000. (The slide didn’t give a comparison point.)

Amazon says that34 million people use its Fire TV streaming devices every month.

Prime memberships come with perks like two-day delivery, access to ad-free original video programming and deals, and are increasingly becoming mainstream in the US. According to a Consumer Intelligence Research Partners surveypublished in January, more than 100 million people use Amazon Prime benefits, representing 62% of Amazon shoppers. At a cost of $119 a year, Prime also represents a high-income consumer. 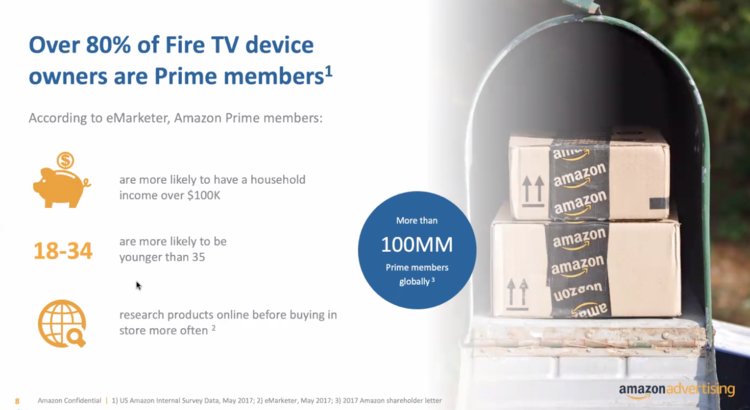 Another slide cites additional internal data that 44% of Fire TV owners have children in the household while another 69% are home owners. Amazon claims that 62% of Fire TV owners are college-educated and 66% of its audience is 25 to 54 years old. 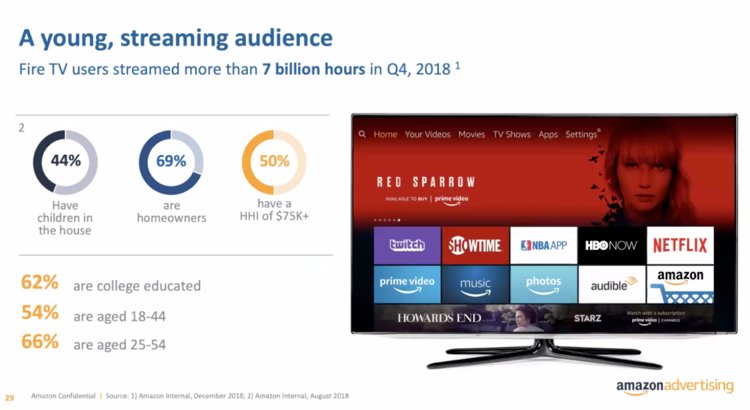 Amazon’s audience represents a hard-to-reach and wealthy audience for marketers. As consumers increasingly pay to avoid advertising or download ad blockers, some of Amazon’s OTT rivals like Roku and Pluto TV are taking a different tack in pitching themselves to advertisers.

According to a pitch deckpublished by Digiday last year, Roku claimed that 87% of its users “are not willing to pay any amount to avoid ads,” suggesting that its consumers are not open to a subscription plan.

Other players like Viacom-owned Pluto TV says that people are getting subscription fatigue. In an interview with Business Insiderafter acquiring Pluto TV for $340 million in January, chief financial officer Wade Davis said that the streaming service is a billion-dollar business that relies on a large group of consumers watching ads for free.

“There is a segment of the market that doesn’t want to pay for anything, and we can be their video and entertainment choice,” he said.