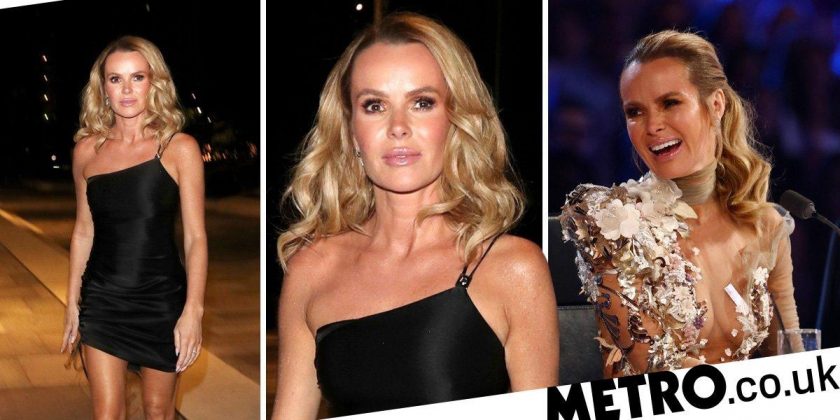 As per usual, much of the chatter around this year’s series of Britain’s Got Talent surrounded Amanda Holden’s chest, because in 2019, breasts still offend some people.

But following last night’s final, Amanda decided to switch it up and give the low necklines a night off.

The 48-year-old looked incredible in a black mini-dress as she attended the BGT after-party at London’s Soho House.

The slinky dress featured a one shoulder design, held up with one thin strap, and ruched detailing on the side.

Amanda paired the simple frock with curled hair and black strapped heels, and boy, was she working it.

The star had changed out of her finale look, as she had watched Colin Thackery be crowned BGT champion 2019 in a semi-sheer floral number.

Again, the judge opted for a low-cut neckline, after her risque wardrobe choices got the nation talking – with one dress even racking up numerous Ofcom complaints.

Yes, because of a bit of cleavage.

Amanda is more than happy with the attention, telling the Mail: ‘I love it that people are still talking about my tired old breasts and I’m nearly 50!

‘No one talks about Alesha Dixon’s – she’s got great boobs, by the way – and she’s eight years younger than me.’

And she previously joked about her husband Chris Hughes’ appreciation for her style, telling The Sun: ‘My t**s seem to become the show’s biggest talking point every year.

‘We’ve had plenty of complaints apparently, but none from home, let me tell you.’

While Amanda amped up the glam last night, it seems she wasn’t going too hard, as she was up at the crack of dawn for her new job this morning.

Amanda has replaced Emma Bunton on Heart Breakfast, and rocked up to the studio in Leicester Square bright and early, armed with celebratory cakes and a pair of sunglasses, perhaps to hide the effects of an afterparty bubbly.