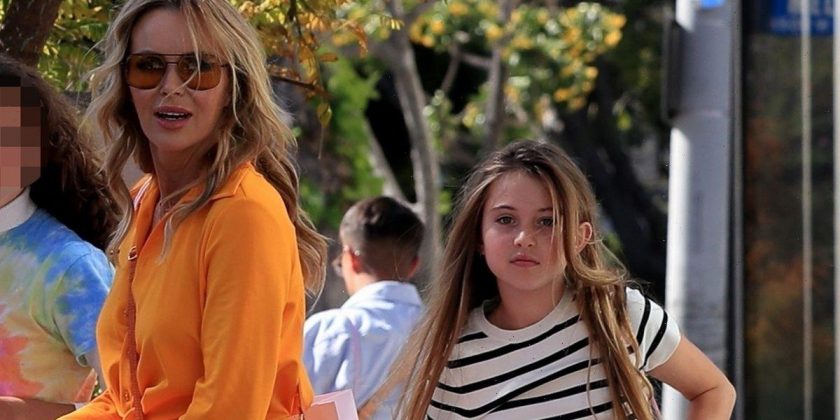 Amanda Holden was spotted with her youngest daughter Hollie splurging whilst on a shopping trip in West Hollywood, California, on Tuesday.

The pair appeared to be making the most of their trip Stateside as they were seen holding onto shopping bags after visiting clothing store Pretty Little Thing in the area.

Amanda was dressed brightly to match the sunny Los Angeles weather during the outing as she was pictured wearing a bold orange mini shirt dress with a pair of white lace-up trainers and an orange Chanel handbag worn across her chest.

The TV judge had her blonde hair styled in loose waves and sported a pair of brown aviator sunglasses with rose-tinted blush and lip gloss revealed underneath.

Hollie, 10, looked content with her buys as she was photographed beside her mum and a friend with a giant pink PLT bag and wore a white striped T-shirt tucked into a pair of high waisted light brown shorts.

Amanda is currently enjoying a family holiday in the US after “three years of trying” following Covid-19 restrictions she revealed to followers as she posted a photo of herself with daughters Alexa, 16, Hollie, and husband Chris Hughes at Disney World days ago.

“We finally made it out here after 3 years of trying (covid) @disneyparksuk #disneyworld we share the same birthday #disneyworld50 #1971 #family #orlando,” the Britain’s Got Talent star captioned.

The next day Amanda shared another picture with her girls, this time wearing the iconic Minnie Mouse ears having a “truly magical” time at Disney World in the evening.

The mum-of-two appeared to have well and truly settled in as she posted another snap of herself on Instagram on a balcony outside in what appeared to be the resort she and her family are staying in.

In the shots posted, Amanda is seen standing out once again wearing a bright pink printed wide leg jumpsuit with a plunging neckline and a matching textured blazer which was placed over her shoulders.

The radio host accessorised her holiday outfit with a white pearl bracelet and matching purse, a couple of necklaces and a pair of pink pointed pumps and was captured stood in front of what appeared to be the lobby of the resort.

Photos of her appearance in the US come days after the premiere date for the upcoming series of Britain’s Got Talent was revealed to be this Saturday 16 April as the show returns to ITV at 8pm.