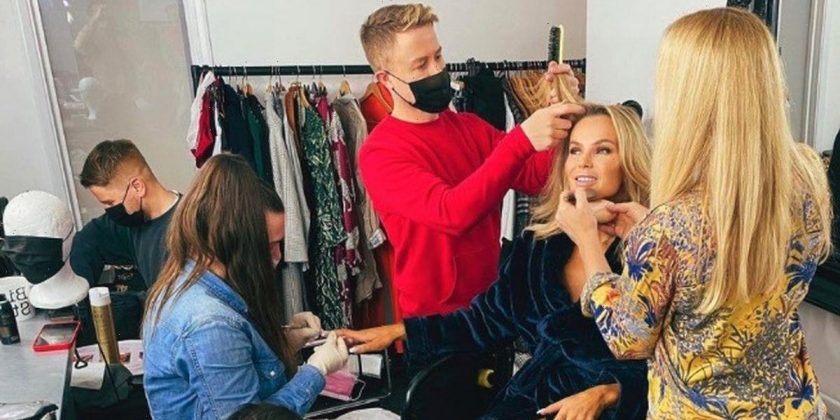 Amanda Holden offered fans a glimpse behind the scenes of what it takes to be one of the most glamorous women on British TV.

The 50 year old, who is currently appearing in Neighbours, shared a photo to Instagram of her team who can be seen all simultaneously attending to her hair and make up.

A man in a red jumper combs through her golden locks, as another woman with her back to camera touches up Amanda's makeup.

The star extends her delicate hands for a manicure to another team member as the final nail artist tends to her toes.

Amanda perched on a chair in a plush velvet navy robe as her team got to work on her hair and beauty.

She extended a slender, tanned leg for her pedicure, while her other foot was cosily kept in a matching navy blue fur lined slipper.

The Britain’s Got Talent judge playfully captioned the multi-tasking team photo: “We will rebuild her.”

The Heart Radio Host has recently joined the cast of the long-running Australia soap Neighbours. Amanda is filming in London for the beloved series and it is thought that her team might have been preparing her for the show.

Amanda will play the aunt of Jason Donovan’s daughter, Jemma, 21 in the soap. The duo were spotted near the London Eye this week shooting episodes that will air in Spring 2022.

Channel 5 have revealed the first look at the actress on the TV series as well as a snap of the Amanda and Jemma relaxing in between takes with the famous Ramsay Street sign where the soap is set.

In the show, Harlow, played by Jemma, travels to London to find out more about her mystery surrounding her late mother, Prue, who was played by another English actress, Denise Van Outen.

Fans stopped to watch the stars film in central London and with their striking similarity, some passersby even thought that Amanda and Jemma were related in real life.

“So many people were beeping in their cars and passersby assumed that Jemma was my real daughter because we look quite similar!” Amanda said.

“I can't wait to continue the journey of my character Harriet.'

The TV star was thrilled when she started on the show, Amanda gushed: “My first day on set was such a fun and surreal experience.

“If I'd told my 12/13 year-old self I would one-day appear in Neighbours I'd have never believed it!”

In a longer statement, Amanda revealed the significance the show had to her as a child.

“Like most people in the UK who were around in the late Eighties and early Nineties, I grew up watching Neighbours every single day,” she revealed.

“I was glued to our TV for the wedding of Kylie [Minogue] and Jason [Donovan], while cursing Mrs Mangel [Vivean Gray] and praying that Mike and Jane [Guy Pearce and Jane Harris] would eventually get together! Not to mention all the other greats over the years.

“To now have the opportunity to be a part of such an iconic Australian show is simply fabulous. I can't wait to work with Jemma in London. This feels like a joyous occasion for everyone.”

Fans have also been treated to a sneak peek of Amanda’s character on the show as she shared a clip to Instagram on Sunday 10 October.

The star captioned the snippet: “Everybody needs good @neighbours Back on set tomorrow with the gorgeous @jemma_donovan.”

Stay up to date with all the latest on Amanda Holden by signing up to OK!'s daily celebrity newsletter .