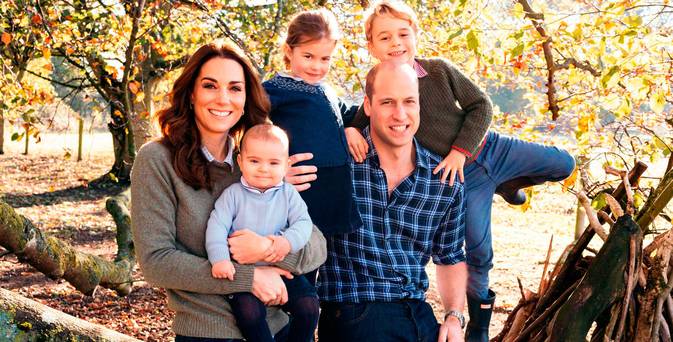 It’s long been bandied about that we’re in the golden age of the British royal family – I even wrote a piece to that effect earlier this month – but Kate Middleton and Prince William’s joyful and exceptionally well executed Christmas card is proof further.

On Friday, the Duke and Duchess of Cambridge released a family Christmas card with three adorable children Prince George (five), Princess Charlotte (three) and Prince Louis (seven months), all of whom are dressed casually in what can only be described as country chic. The picture, taken by Matt Porteous, was not publicly scheduled for release and surprised fans with an injection of festive cheer, with a rare portrait including each member of the family.

It was received exactly as it was intended – relatable and relaxed, this, despite the fact that there is absolutely nothing relatable about the way the Cambridges live in comparison to the rest of the world.

In their world, no move is made without prior consultation and it is an absolute certainty that they are just as choreographed as Meghan and Harry, but they are simply more adept at the game. Meghan’s arrival into the royal fold hasn’t just given endless column inches based on whispers about her way of doing things or feuding with her in-laws, but it’s allowed a new layer to how Kate and William’s tiny clan are received. This year’s portrait is in stark contrast to the formality of last year’s set-up –  in which everyone is suitably dressed up for the occasion – and more in keeping with their Christmas cards of years past, most notably, their first with George and their cocker spaniel Lupo, who stopped making the cut once their brood started growing.

Last year’s suited style was more in keeping with the efforts to make William seem more statesman-like as Charles prepares to ascend the throne, however Harry and Meghan’s insistence on doing things their own way seems to have rubbed off on these two. Their decision to shoot at Amner Hall, their beloved haven, and let the world see even the tiniest glimpse into their sanctuary is virtually unheardof; save only for George in a monogrammed robe meeting the Obamas in 2016 in the parlour of their Kensington Palace apartment.

Read more: Portrait of a modern family: why we’re still obsessed with those candid pictures of Kate, George and Charlotte

Much has been made of the monarchy’s positioning in the wake of the never-ending Brexit woes, and ‘sources’ keep telling tabloids that Queen Elizabeth and her family tree are taking this as an opportunity to portray themselves as a pillar of continuity and strength. It’s quite the feat that they have successfully positioned themselves as an essential part of British life during its most vulnerable time in modern history. And that is thanks, at least in part, to some extraordinarily effective PR on Kate and Will’s behalf.

Kate knows the power her personal style wields, and once again recycled olive green Fjällräven jumper from earlier this year, all the while holding her seven-month-old. See, she’s just like us!

Their desire to appear frugal is heartening, but deliberate as any of their other public decisions. For public events, George was styled after his father at the same age and now Charlotte has been wearing some of her big brother’s pieces, including this Fina Ejerique cardigan which she first wore in a portrait kissing little Louis days after his birth. In the new shot, she poses mischievously in the middle of the set-up, arms around both of her parents. It’s absolutely adorable.

George has finally been allowed to shed his little Victorian boy image and been upgraded to trousers, with a pair of grass-stained jeans with a pair of Hunter wellies, evoking images of his lively energy. We were all too busy admiring the children’s hand-me-downs to notice Kate’s Oak Leaf Hoop Earrings by Asprey, which retails for €5,700.

Congratulations, you have just been Cambridged. It’s the most staged we’ve seen this couple allow themselves to appear: while at work functions, you get the feeling they are taking their responsibilities seriously, but at the end of the day, just doing their job. We’ve seen enough long lens pictures of Kate in casualwear, walking around London, taking George to the Natural History Museum or wrangling them at the polo, to know that their downtime is precious and more importantly, genuine.  But drastic action was required.

Amid a swirl of rumours of warring wives and princes, the focus has been successfully take back the narrative and portray them each as individuals, as people, as family men with their pride and joy and with one on the way. And it worked. At least until the next story breaks.