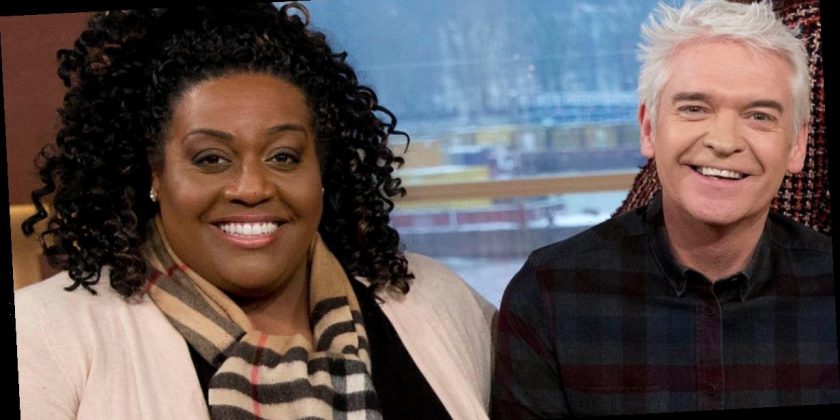 Alison Hammond has spoken out in support of Phillip Schofield amid rumours of a bitter "feud" behind the scenes of This Morning.

It was reported over the weekend that Ruth Langsford, 59, has made a formal complaint to ITV about the 57 year old host's attitude, with another seven of his co-stars thought to have spoken out about a "toxic atmosphere" he has created on the show.

But Alison, who regularly features on the daytime show, has now publicly backed him amid the claims, telling the presenter he is "loved."

The 44 year old scrolled through six months worth of tweets sent by Phillip to find one that he sent in June about "hurtful and wildly untrue stories" that had circulated about him allegedly "blocking" Amanda Holden from becoming his co-host while Holly Willoughby presented I'm A Celebrity… Get Me Out Of Here! last year.

Phillip wrote earlier this year: "The end of another really sad weekend. When you try for 35 years to be the easiest, most fun person to work with and you read such hurtful an wildly untrue stories from nameless 'sources'.

"Obviously I'll take it on the chin.. I just hope you know me better," he continued to his 4.5million followers.

Alison — who is thought to be joining the line-up of Celebs Go Dating — has now responded to his historical tweet, telling the TV legend: "YOU ARE LOVED full stop," alongside a red heart emoji.

Amid the drama, it has been reported that ITV bosses have considered replacing Phillip with Ben Shephard if he was ever to leave the show.

The network's daytime boss Emma Gormley has said that Good Morning Britain presenter Ben is her "top choice" to take over due to his "great chemistry" with Holly Willoughby.

Earlier this week, Amanda shared her support for Ruth and her apparent decision to lodge a formal complaint with bosses at the network after he cut her off during a live link to the Loose Women studios.

Ashley said: "Lots of buzz around Philip Schofield at the moment. There are reports that things are a little tense between him and Holly Willoughby as well as Ruth Langsford. ITV says it's just gossip and that he and Holly are great friends, both on and off screen."

Amanda's co-host Jamie Theakston then joked: "If only there was someone here who might be able to help us with that story."

The Britain's Got Talent judge responded: "Listen, I've drawn a line under all those issues with Phillip.

"Well I'm just gonna say that I really admire anyone that sticks up for themselves because it is not an easy thing to do.

"There is a tin opener and there's a can somewhere and other people have found the tin opener. That's all I'm saying," she continued.