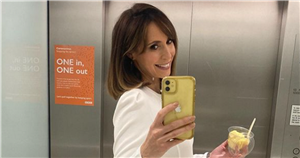 Alex Jones has admitted that she had no idea she was expecting her third child and blamed her symptoms of fatigue and hunger on her vegan diet.

The pregnant One Show presenter, who will soon welcome a girl with her husband Charlie Thomson, explained that she wasn't necessarily planning on having another child – and was stunned to discover that a new arrival was on the way.

"I just felt really tired, but, of course, in hindsight, I was pregnant. I thought it was the veganism making me drained of energy, but it wasn't," the 44 year old told MailOnline.

Giving further context, Alex added: "This is ridiculous in a third pregnancy, but I didn't realise the clues were there because I honestly blamed everything on the veganism. I was so tired and hungry all the time, and I thought it was that." Eventually, Alex decided to take a pregnancy test when she found out, to her surprise, that she was expecting another child.

Already a mother to sons Teddy, four, and Kit, 23 months, Alex admitted that she and husband Charlie were "ecstatic" to learn they were having a little girl.

However, she did acknowledge the difficulties associated with soon being a mother of three young children.

"It'll be hellish at times, I'm sure, because we'll have three under four and a half, so it'll be quite demanding. We just feel super lucky, super lucky that it's happened.," she said.

In March, Alex revealed on The One Show that she was pregnant with her third child during a segment on lockdown babies and the rise in women being pregnant.

She said: "I feel really nervous all of a sudden. It just seems like a good time to share some news with everybody, and the crew in the studio for the first time.

"I mean lockdown has been anything but predictable and we've had some really unexpected news – baby number three is on the way."

She then added to co-host Ronan Keating, who recently had his daughter Coco last year, that: "I need all the tips. We didn't see that one coming, but we're delighted."

Ronan then asked what gender the baby was, to which Alex replied: “A little girl” to more rapturous applause.