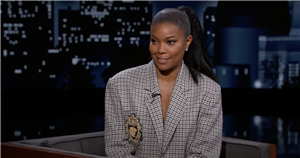 Well, it’s a good thing Gabrielle Union can afford to have expensive habits! During her Jimmy Kimmel Live! appearance on Tuesday, the actress and author chatted with the late-night talk show host about some of the “fun stuff” in her second memoir, You Got Anything Stronger? – including her love of strip clubs. When asked how many times she frequents strip clubs every year, Gabrielle said, “Pre-pandemic, I don’t know 10, 15 times,” and doubled down on her answer confirming that she’s indeed “a connoisseur.” She even gave a shoutout to famous Atlanta strip club, Magic City, which she refers to as a “welcoming place” that she favors whenever she’s in town.

The biggest shock of the conversation was the hefty amount of money Gabrielle drops in the club when she visits, which according to her could be anything between $10,000 and $20,000. “You don’t really think about it because the booze,” she explained. “And you just want to make sure all the ladies go home with a little something.” Though she tries to keep her trips to “solo operations” or outings with friends, Gabrielle did share that in the beginning of her and husband Dwyane Wade’s relationship, she’d bring him to strip clubs with her, saying he might’ve even been a little intimidated by the reputation her and her wallet seemed to have. Either way, Gabrielle sounds like just the kind of person we want to hang with whenever we’re up for a wild adventure! Watch her hilarious interview above.