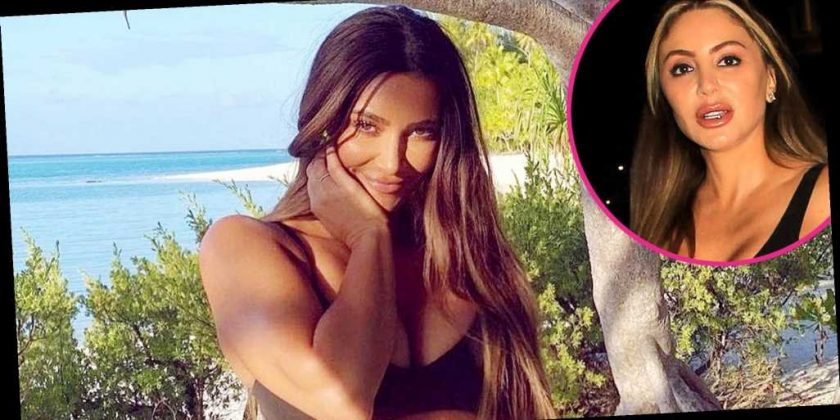 A smirk says it all! Kim Kardashian seemed unfazed after her once-close friend Larsa Pippen detailed their falling out for the first time.

The Keeping Up With the Kardashians star, 40, shared four photos via Instagram on Monday, November 9, of herself smiling during a tropical vacation. “Smiles for Miles,” she captioned the post.

In the snaps, Kardashian wore a black bikini top with matching shorts as she posed on a beach and climbed a tree limb near the ocean.

The E! personality uploaded the pictures just hours after Pippen, 46, blamed their rift on Kardashian’s husband, Kanye West, during a bombshell appearance on the “Hollywood Raw” podcast.

“If Kanye feels like him and Kim are better without me, then let them be without me. I’m OK with that,” she said on Monday’s episode. “I will survive. I want everyone to be happy!”

The Real Housewives of Miami alum went on to claim that the “Gold Digger” rapper, 43, has “brainwashed” his wife and her famous sisters since the couple married in May 2014.

“They all started to ride his wave. If you’re that easily swayed, like the wind, then do I really give a f–k? Should I give a f–k? I don’t know,” she said. “Was I hurt by it? Yes. But at the same time, I’m like, I’ve done nothing. I’ve never done one thing. I’ve been the most honest and truthful best friend to all of them.”

Fans noticed in July that Kardashian and Pippen unfollowed each other on Instagram, sparking rumors that the pair were no longer on good terms. At the time, a source exclusively told Us Weekly that the reality stars “just naturally grew apart over a period of time” and that the KKW Beauty founder simply “wanted to reset [her feed] just to her family and childhood friends.”

Pippen, however, insinuated on “Hollywood Raw” that West was behind Kardashian’s decision to unfollow her, saying, “We’re like sisters, we’re family, but if you have to unfollow me to make your home a better place, do it. He talks so much about me being this and that and this and that. I just feel like Kanye was in a place where he really didn’t trust anyone with Kim.”

The former Bravo personality also alleged on the podcast that she dated Tristan Thompson before his relationship with Khloé Kardashian and that Travis Scott once called on-off girlfriend Kylie Jenner to claim that Pippen had been “hitting on him” at a nightclub. “That never freaking happened,” she insisted.

Kim has yet to directly address Pippen’s claims. Scroll down to see more of her smirky vacation photos!