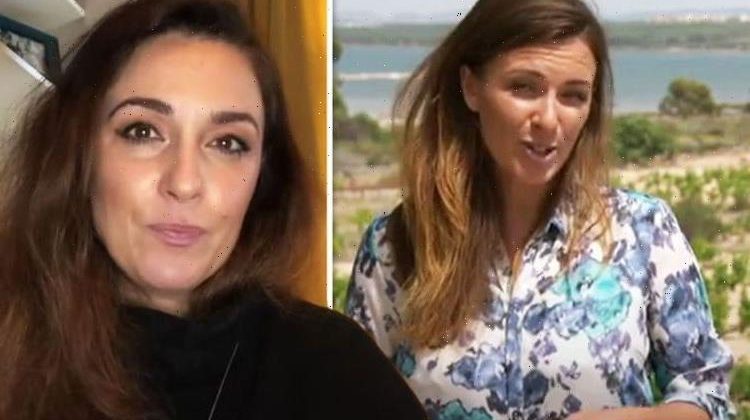 A Place In The Sun presenter Sara Damergi, 41, has told how she still receives concerned messages from fans every time one particular episode of the popular property show airs. Speaking to Express.co.uk, the Channel 4 property host explained that after an encounter with one “angry” house hunter, which was filmed nearly a decade ago, worried fans still get in contact to make sure she is ok following the awkward encounter.

People always message me to ask if I’m ok, but it was like eight years ago

When asked about the most challenging aspects of the show, the mother-of-two candidly addressed her least favourite parts of filming.

She said: “It’s frustrating when you and the team put in a lot of work and they [house hunters] change their minds on what they want, for example, which has happened on numerous occasions.

“There’s an infamous show that whenever it’s played in the world people message me and say, ‘why didn’t he go in the house?'”

Sara went on to reveal how the awkward encounter came about, adding that concerned fans always check in to see whether she coped ok after the uncomfortable moment.

She explained: “There was a guy who wouldn’t go into the house and he got very angry, and people always message me to ask if I’m ok, but it was, like, eight years ago!

“But sometimes, people change their minds halfway through, and of course it’s frustrating, as you want to do the best job for them and want them to be happy.”

Addressing her frustrations, Sara continued: “But at the same time it’s like, ‘why didn’t you think of this first?'”

Despite some house hunters’ indecisive natures, the property expert admitted that it can make for the best viewing.

Sara added: “But sometimes, they end up being the best shows as they [house hunters] know exactly what they want and quite often, they will buy and will have found their dream home by the end of it.”

However, the star confessed that it can cause logistical problems for the APITS team when house hunters change their minds over what they want in a property.

“But of course, we’re all scrambling around like lunatics trying to fix everything, so lots of late nights and trying to change the whole list of what they’re looking for,” Sara said.

“So that’s always challenging,” she finished.

The APITS presenter is set to return to screens early next month, as she rejoins the show after a three-year break.

Sara first joined the Channel 4 property programme 10 years ago, but in 2018, she announced that she was taking a break from the show as part of her maternity leave.

After welcoming her son Oliver, the star decided to step away from her hosting duties.

But in an update last year, Sara revealed that she was back on the show.

Taking to social media, she wrote: “I’m rejoining the @theplaceinthesunofficial team! Wow it’s a decade since I first set off on a flight for this fab show!

“This time I’m going with some extra luggage in the shape of two tiny humans, a Swede, a c-section paunch, and everything bar the kitchen sink.”

Sara went on: “But SO excited to start dream making once again!”

“A huge thank you to @aplaceinthesunofficial and @channel4 for being so supportive to a breastfeeding mum,” she finished.

A Place In The Sun airs weekdays at 4pm on Channel 4.