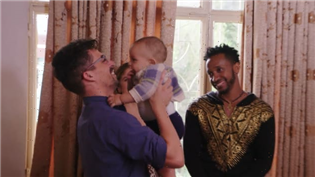 On Season 3, Episode 2, Ariela's ex-husband met her fiance for the first time.

Biniyam struggled to understand why they divorced … which led to a very interesting conversation.

Viewers get to hear from Alina for the first time before she and Steven meet up in Turkey.

In addition to introducing herself, Alina has some worries … and Steven has some secrets that he hasn't told her.

Now, they need to plan the wedding, but they need to worry about family issues, possible bigotry, and their own different ideas.

Speaking of different ideas, Evelin and Corey are finally planning their wedding … but aren't seeing eye-to-eye.

Jenny and Sumit managed to calm down after last week's explosive confrontation.

Sumit thinks that he's found a loophole, since he has decided that marrying the woman he loves is off-limits for now.

Ellie breaks the news to some friends that her "vacation" to Columbia will actually be a move.

They are stunned … and Ellie makes an alarming revelation about Victor's history.

2.He claims that he's not jealous

3.Biniyam thinks that she's ashamed of the ring

4.But Ariela didn't leave the ring on purpose

7.Leandro has a totally different mindset

8.They bring him home

10.Biniyam is immediately weird about it

11.Biniyam is, unfortunately, not very mature about it

12.Biniyam asks why they aren't still together

13."We never actually broke up"

15.We finally get to hear from Alina!

16.She is studying Chinese language and Asian politics

17.She gushes about Steven

18.She lives with her mother and grandmother

24.But it's Alina's decision to make

25.Alina tries on outfits before her trip

27.Alina has never actually had sex

28.Time for a VERY fair question

30.Nastia and Julia have an idea

31.But there's something that Alina does not know

33.It's time for wedding planning

34.Armando has BIG plans for their wedding

36.Armando's biggest worry is who will actually come