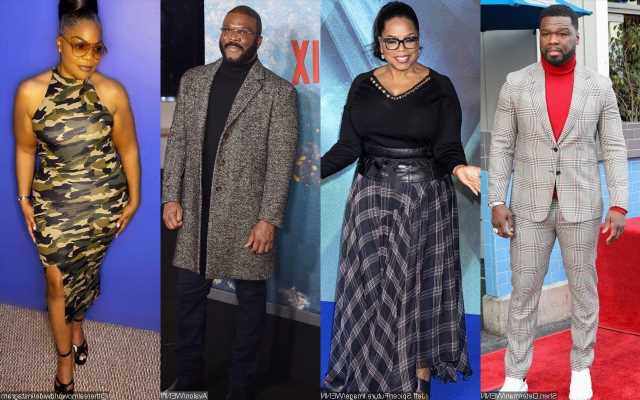 The ‘In Da Club’ hitmaker previously asked the film industry to cast the comedienne back as she has been blackballed since refusing to promote Lee Daniels’ 2009 film ‘Precious’ internationally.

AceShowbiz –50 Cent has a message for Oprah Winfrey and Tyler Perry. Weighing in on the TV personalities’ feud with Mo’Nique, the “In Da Club” hitmaker urged the pair to apologize to the comedienne.

On Monday, March 14, the “Power” alum shared on Instagram an infographic video from HotNewHipHop that discussed his support for Mo’Nique. In the caption of the post, he wrote, “I’m sure Oprah Winfrey and Tyler Perry would not want to continue to allow [their] influence to damage @therealmoworldwide career and this has went on for way to long.”

“So now would be a great time to apologize because i’m gonna put her back on,” the 46-year-old rapper/actor, born Curtis James Jackson III, further stressed. He then added, “I don’t miss!”

Prior to this, Fiddy showed his love to Mo’Nique on Instagram. “I went to see @therealmoworldwide stand-up show [during] Super Bowl weekend. Oh s**t! Was so good, she had my a** in a trance,” he gushed in an Instagram post. “You gotta go check her out the s**t was [fire].”

Earlier this month, Fiddy let out a photo of the 54-year-old actress while asking the film industry to cast her back. “All in Favor of @therealmoworldwide being back on Top, Say make it happen 50 ! STOP F**KING AROUND,” he emphasized.

Mo’Nique, who stars alongside Oprah in Lee Daniels’ 2009 film “Precious: Based on the Novel ‘Push’ by Sapphire“, has been feuding with the talk show host and Terry for years. She claimed that the two did not stand up for her when she was wrongly accused of “being difficult” for not promoting their movie internationally.

Calling out Oprah, Mo’Nique once wrote on Instagram, “My personal experience with you is you’ve watched me as a black women be accused of being difficult for not promoting ‘Precious’ internationally for Lions Gate, at Lions Gate, Tyler Perry and your request, despite the fact my deal was with Lee Daniels Entertainment.” She further fumed, “And, how are you for black women when you hear Tyler on audio saying I was right and he was going to speak up but you or him still haven’t said a word?”

“My sixteen year old self didn’t know that you in your silence in the face of wrongdoing, would make my life ‘harder’. Lastly, please consider standing by the people who are right and not just the ‘right people,’ ” the Oscar winner added in the February 2020 post. She then signed it off with “Love you to life, Mo’Nique.”