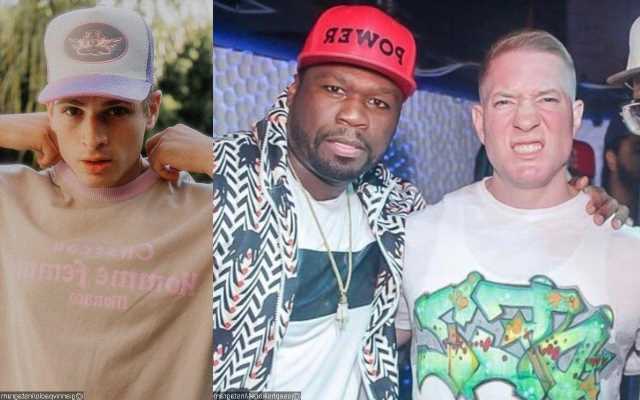 After urging the two ‘Power’ actors to take things physical amid their online back-and-forth, the show’s co-creator/producer tells them to ‘relax’ and focus on their work.

AceShowbiz –50 Cent‘s interesting take on Joseph Sikora and Gianni Paolo‘s beef has earned him a new nickname. The rapper has been dubbed the “messiest boss” by social media users after he appeared to be aggravating the tension between the two actors of his Starz’s series “Power“.

“50 cent is the messiest boss ever,” one person jokingly called out Fiddy on Twitter. Another commented on the G-Unit leader’s response to the feud, “Mr. Messy himself has entered the chat!”

“Not you being petty with the cast from your own show,” a third user weighed in, while another chimed in, ” ‘I never like to start s**t’ (laughing emoji) always starting s**t.” A fifth person added, “lmfaoooooo 50 takes nothing serious and i love that about him.”

50 Cent previously reacted to Joseph and Gianni’s heated relationship on Instagram. Instead of playing a peacemaker, he egged them on to take things physical as writing on his own Instagram post, “[Eyeball emoji] oh s**t, it’s up! [thinking emoji] Now I never like to start s**t but you should sock him Tommy, wait i think this little n***a Brayden got a knife . Lol.”

The 47-year-old TV producer has since returned to the photo-sharing platform to share a more serious message. Urging the two actors to relax, he wrote along with a screenshot of a headline about Joseph and Gianni’s beef, “oh s**t, i need everybody to relax we gotta go back to work.”

The tension between Joseph and Gianni first became public after fans noticed their interaction at 50 Cent’s Tycoon event in Houston, Texas on Sunday, August 28. In footage which has circulated online, Joseph was seen greeting people onstage, but when Gianni approached him, he looked at his hand and ignored his co-star.

Gianni later addressed the matter on TikTok, posting a video in which he said, “You pressed? I would be too.” He added a jab at his “Power Book II: Ghost” co-star as claiming that “some ppl just insecure [shrugging and crying emoji].”

Meanwhile, Joseph responded by writing in an Instagram comment to Hazel-E, claiming that the issue between them has been resolved. “We saw each other at the hotel afterward and talked,” he wrote. “All good. [thumbs up emoji].”

Gianni begged to differ though, accusing Joseph of “telling lies.” He went on ripping the Brayden Weston depicter, “He’s been doing this s**t for years when I’ve shown nothing but respect and love. He kept just saying he doesn’t f**k with me. Nothing was resolved. Stop spreading lies cause people are pressing you about your saltiness. I’ve said nothing but amazing things about this dude on the podcast and if you listen to it you know.”

Joseph further threw a shade at Gianni on his new Instagram post. “Ever think about the reason you have a job??? Chill out Brayden,” he wrote, referring to Gianni’s character.

According to TMZ, the tension between Joseph and Gianni has long been brewing before the former dropped a public diss on Gianni. Things reportedly got out hand recently, with both camps aggressively throwing money at one another during a Houston Tycoon Fest party. Their respective security teams allegedly almost came to blows, but thankfully things didn’t turn physical.