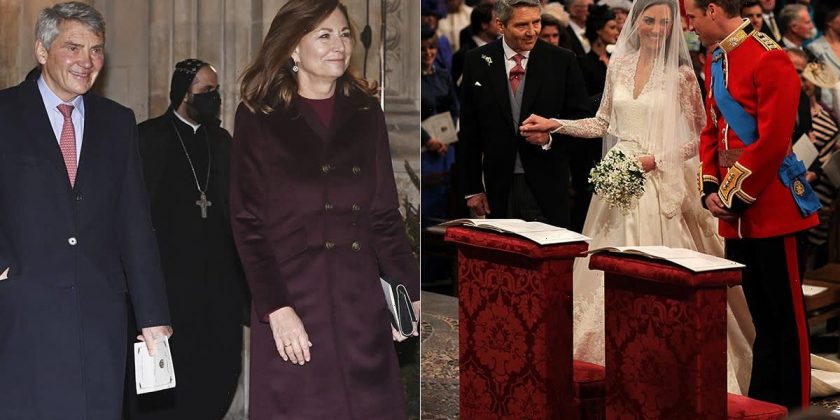 Having a close bond with your in-laws is almost every married person’s dream, and it seems the Duke of Cambridge hit the jackpot. With eleven blissfully married years under his belt, his relationship with Kate’s family, the Middletons, has grown from strength to strength.

SEE: 10 best photos of Prince William and Kate Middleton from their dating years

From skiing trips to group holidays in Mustique, Prince William has always been welcomed and included by his second family (and vice versa!)

WATCH: Prince George gets shy as he meets Novak Djokovic

The Duke is said to have asked his grandmother the Queen to invite his wife’s family to the carriage parade at Ascot and the Thames boat pageant for the monarch’s Diamond Jubilee in 2012.

Pre-pandemic, fans would also see the Cambridges take their three children to visit Kate’s parents, Carole and Michael Middleton, in Bucklebury, with George, Charlotte and Louis loving the company of their grandparents.

Let’s take a look at some of the Duke’s fondest moments with his in-laws.

William and Kate dated for seven years before tying the knot at Westminster Abbey in April 2011. During their early years, Kate’s sister Pippa Middleton would often join Kate to watch William play in charity polo matches, and one time even take part in an old boys’ match at Eton College.

Since Kate and Pippa are both very close, the Duke has also matched this bond. In 2014, Pippa talked on the Today show about how tight-knit she is with her older sister and Kate’s husband, saying: “We’re very close. And, you know, we support each other and get each other’s opinions and things.”

William is also said to have offered Pippa “guidance and support” after she became linked to the royal family, to learn how to adjust to the Firm’s protocol.

SEE: 10 times Pippa Middleton stole the spotlight at Wimbledon with her stylish outfits

At Pippa’s wedding to James Matthews in 2017, Prince William was snapped chatting and laughing with Kate’s younger brother, James Middleton.

Prince William has always been close with James but their relationship was seen to be solidified in 2019 following James’ op-ed in the Daily Mail where he opened up about his battle with depression three years prior.

“I feel compelled to talk about it openly because this is precisely what my brother-in-law Prince William, my sister Catherine and Prince Harry are advocating through their mental health charity Heads Together,” he wrote. “I want to speak out, and they are my motivation for doing so.”

In 2020, James gifted the royal couple an eight-month-old puppy, shortly before their English Cocker-Spaniel Lupo passed away in November.

Prince William with the Middletons

Although they usually spend Christmas with the royal family at Sandringham, William and Kate have enjoyed occasional Christmases with the Middletons in Berkshire.

Before their marriage, the Duke promised Kate that she would not have to be separated from her family over the holidays and it seems William has kept that promise. Here the Cambridges are pictured attending church on Christmas Day with William’s in-laws.

In 2018, Prince William toured for five days around the Middle East, including the ancient city of Jerash. His wife, Kate, had visited the ruins with her father Michael and sister Pippa in the 1980s when they lived in Jordan.

Coming across an old photograph of the trio placed near the exact same rock Kate had played on decades earlier, William laughed, saying: “Michael’s looking very smart in his flip-flops.”

The royal then tried to recreate the photo, and was photographed in the same spot, before commenting: “Need to come back with the family for this shot.”

Walking the beautiful royal bride down the aisle, Michael Middleton and his daughter were treated to William’s humour when they reached the altar, after the groom joked to Michael: “Just a quiet family wedding, then.”

Before proposing to his girlfriend in Kenya in 2010, William didn’t ask Michael for his blessing.

In a TV interview after their engagement was announced, he said to Tom Bradby: “Well, I was torn between asking Kate’s dad first and then the realisation that he might actually say ‘no’ dawned upon me.”

But William had seemingly nothing to worry about; after Kate’s parents heard the news, they were elated. Eleven years on since marrying Kate, William’s relationship with his parents-in-law is stronger than ever.