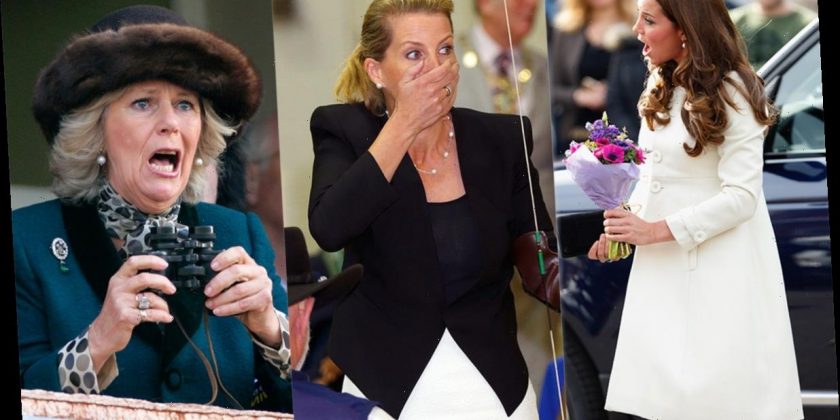 We love it when we’re reminded that members of the royal family are just like us – minus the responsibility, power and wealth. While their daily schedules are mapped out to a T, there are times that they just can’t prepare for, like the shock of a surprise proposal during a royal outing, or when the Duchess of Cornwall appeared startled by a horse race. These instances of utter disbelief make for some incredible moments. Here are the pictures to prove it…

The Duke and Duchess of Sussex had the best facial expressions when they witnessed a surprise proposal at the Endeavour Fund Awards in March. Harry and Meghan both smiled and applauded, while Meghan was seen placing her hands on her chest, after a military veteran proposed to his partner on stage. The couple later invited the newly-engaged couple to speak with them privately after the awards ceremony finished.

MORE: 18 fabulous photos of the Queen and her family enjoying themselves at royal parties

Her Majesty certainly looked taken aback as she visited the Coronation Festival in the grounds of Buckingham Palace back in July 2013. The monarch was inspecting a Jaguar motor car at the event which celebrated the 60th anniversary of the Queen's coronation. The event, hosted by the Royal Warrant Holders Association, showcased the best of British design, technology, entertainment, food and drink.

In October 2019, the Cambridges surprised royal watchers as they stepped out for the Norwich City v Aston Villa football match. The royals cheered on their team, Aston Villa, but it was Prince George's reaction to player Conor Hourihane's goal against Norwich that really caused a stir. The young Prince couldn't contain his excitement, jumping up and down and punching the air with joy. Even when dad Prince William asked him to calm down, the little lad paid no attention and continued his adorable celebrations. But William, who is mad about football, also couldn't help himself as he celebrated another goal, throwing his fist into the air.

MORE: The secret the royals have been hiding about the Royal Box at Wimbledon

Princess Diana appeared surprised in 1980 after stalling her new red Mini Metro outside her Earl's Court flat when leaving for a job as a nursery teacher in Pimlico. This snap was taken by photographers in the midst of speculation about her romance with Prince Charles. You must admit – stalling the car is pretty awkward even without paparazzi catching the embarrassing moment.

The Duchess of Cornwall

The Duchess of Cornwall appears shocked as she watches a horse race at Ladies Day at the Cheltenham Horse Racing Festival in 2012.

Prince Edward’s wife visited Wheel Power in 2014, the national charity for wheelchair sport in the UK, and it seems Sophie was surprised by her archery skills or lack thereof.

The Duchess of Cambridge looked startled leaving the screening of David Attenborough's Natural History Museum Alive 3D in 2013. The 90 minute 3D movie used CGI imagery to bring to life several extinct animals in the museum, we can only think Kate was blown away by how realistic the extinct animals were!

The Duchess of Cambridge appeared shocked as she arrived at London's Ealing Studios to meet the cast of hit ITV drama Downton Abbey in 2015. Perhaps it was the surprise of finding out how small the filming location is that caused this reaction, with Kate remarking: "The sets are so much smaller than you imagine- especially when you've got all the crew in here as well!"

The Duke and Duchess of Cambridge

The Duke and Duchess of Cambridge appeared surprised beside the Earl of Wessex as they watched a hockey match between Wales and Scotland in 2014. The trio were visibly enthralled by the sporting action, with their presence going unnoticed by fellow spectators until the cameras showed them on the arena's big screens, leading to an eruption of applause.

The Duchess of Cambridge appeared both shocked and amused after Princess Charlotte playfully poked her tongue out towards the crowds during the King's Cup royal sailing regatta last August. The moment came when Kate encouraged Charlotte and Prince George to wave to the crowd through a window, but while George walked away down a flight of stairs, Charlotte instead decided to pull the funny face – while Kate couldn't stop giggling. It was later revealed that the five-year-old stuck her tongue out because she'd spotted her granddad Michael Middleton down below!

The Duchess of Sussex

The Duchess of Sussex was caught looking surprised whilst arriving at The Nelson Mandela Centenary Exhibition at the Southbank Centre in 2018. The mother-to-be was accompanied by Harry to learn more about the life of South Africa's iconic former president.

This was the moment the Countess of Wessex reacted to watching Frankie Dettori ride 'Stradivarius' to victory at Ladies Day at Ascot Racecourse in 2018.

The Prince of Wales

The Prince of Wales was astonished when meeting the mascot of Army Air Corps, Zephyr the eagle, at the Sandringham flower show in 2015. The eagle became startled and attempted to fly away, leading to the Prince and Duchess of Cornwall reacting in this way.

James and Pippa Middleton were caught off guard at the Wheelchair Rugby exhibition match during the Invictus Games in 2014 in London, where they watched Prince Harry and Zara Phillips compete.