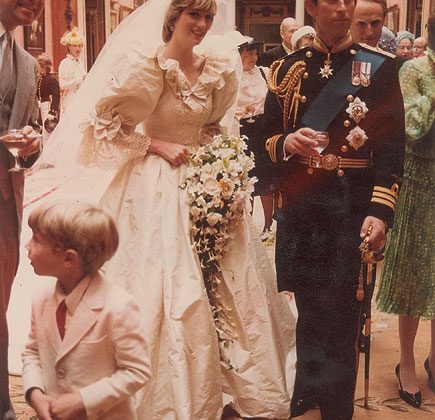 Diana enters Buckingham Palace surrounded by the young bridesmaids and pageboys. 3,500 guests attended their July 29 nuptials back in 1981.

In her arms, Diana cradles Clementine Hambro, who, at just 5 years old, was her youngest bridesmaid.

Unlike the rest of the girls, Hambro was Diana’s choice – she was a favorite pupil of Diana’s at the Young England kindergarten, where she taught before she was married.

Dubbed the “wedding of the century,” Charles and Diana’s nuptials were attended by the royal family at home, and others abroad. Here, the Queen Mother looks on as Diana and Charles speak with their attendants.

Prince Andrew (bending) and Princes Charles (right) chat with the wedding attendants after the elaborate ceremony at St. Paul’s Cathedral in London.

Charles and Diana walk out onto the iconic Buckingham Palace balcony, where hundreds of thousands of well-wishers wait below.

The newlyweds in a candid, intimate moment just after saying their vows at St. Paul’s. Diana’s iconic dress was crafted by British fashion designers David and Elizabeth Emanuel.

Diana – and her long (25 foot!) train – prepare for the day’s official portraits.

Both the Spencer and Windsor-Mountbatten family fill the Buckingham Palace throne room before the staged portraits are shot.

Princess Michael of Kent, wife of Prince Michael, a cousin of the Queen, chats with a guest.

These photographs are outtakes from Patrick Lichfield’s private photograph taken for the royal family. Since 1981, the photographer’s assistant has held these rare images.

…While the Queen looks on. “You can see the Queen watching the throng of people outside Buckingham Palace,” Bobby Livingston, Executive VP of RR Auctions, told PEOPLE. “It’s pretty spectacular.”