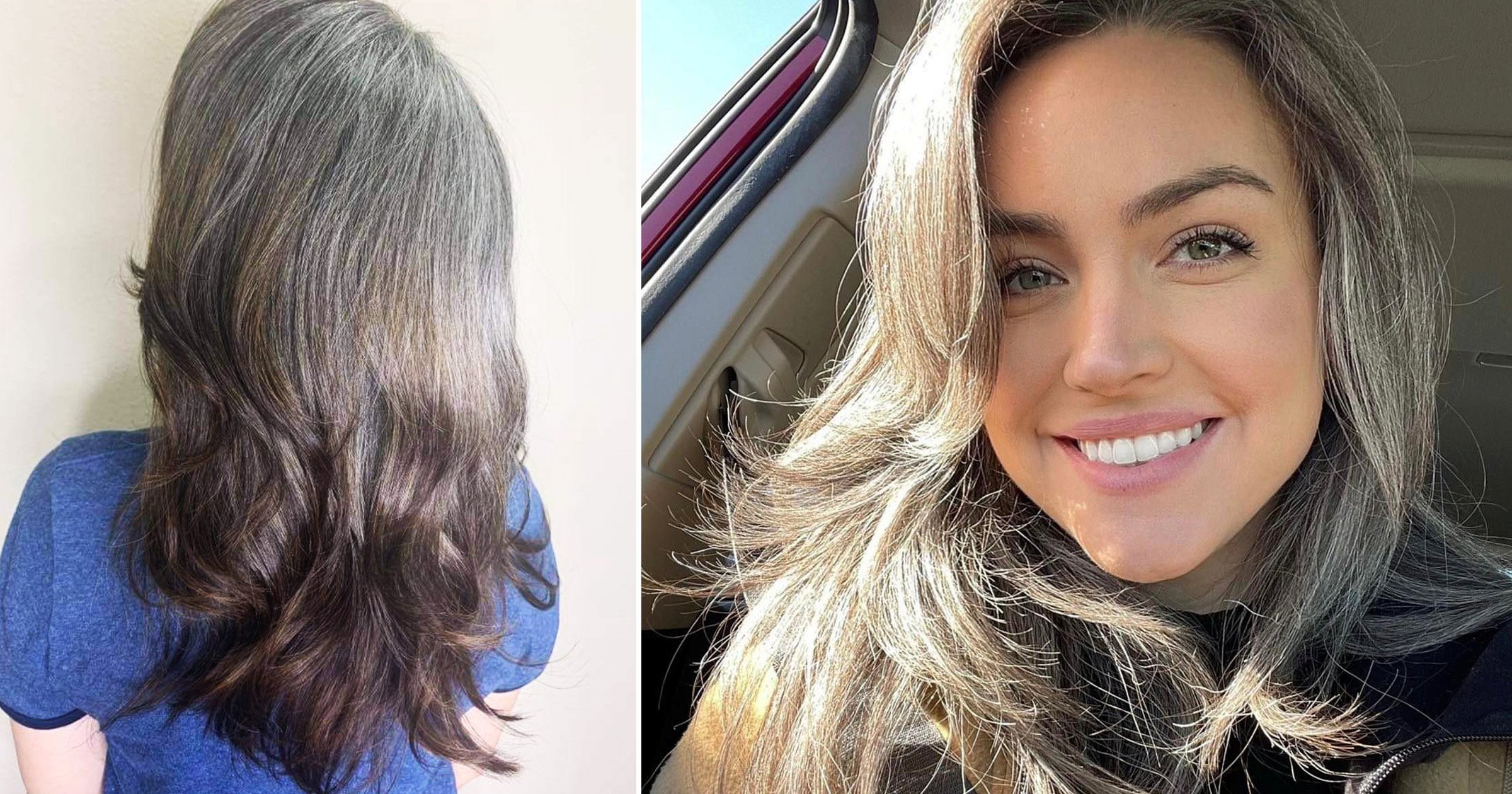 A mum who was bullied at school for her grey hairs at 16 has stopped using dye and embraced her natural hue.

Shannyn Pierce, 34, was embarrassed when grey hairs started appearing as a teen.

This sadly left her being bullied by fellow classmates with some of them calling her ‘old’.

In reaction, she started dyeing her hair, but would spend a whopping £130 every six weeks in the salon to turn her hair almost black.

However, as her 30th birthday came nearer, Shannyn decided to embrace her grey locks.

Four years on she has no regrets and claims she has never received so many compliments on her hair.

Hockey coach Shannyn, who lives in Celina, Texas, US, with her husband, Trevor, 35, a software architect, and their two sons, Rowen, nine, and Jackson, seven, said: ‘It’s honestly the best hair of my life.

‘I’ve never received more compliments on my hair than I do now.

‘It’s incredibly healthy and it actually moves on it’s own because it’s not covered with chemicals.

‘It’s not weighed down or anything like that, it’s really nice. It’s so much easier – and so much cheaper.

‘I save an incredible amount of money now, and thank goodness, because I have two children now.’

Her mum constantly dyed her hair and so as a teenager, Shannyn grew up around others hiding their natural hair too.

‘I was really involved in sports and with friends and then I just started growing grey – it’s my genetics,’ she explained.

‘People had opinions and you start being ashamed of it and want to cover it up, which I did for about 15 years.

‘At high school, I started getting all sorts of comments about how ugly it is, and people were saying “you’re old” and “you really need to get your hair done.”

‘I grew up in a household where my mother always coloured her hair, and she still does to this day – I’m pretty sure she’ll die with a box of hair colour in her hands.’

Although nervous at first to let her greys shine, Shannyn loves it now and wants other women to stop feeling embarrassed.

Ditching the hair dye has meant Shannyn saves around £1,000 a year and now she loves her natural colour, as does her family.

‘Right before I turned 30 years old, I had seen so many women and young girls getting made fun of and being given such a hard time for having grey hair,’ she said.

‘To me, I just felt that was absolutely ridiculous and unnecessary, so I decided I’m just going to go ahead and do it.

‘I know that I’m not unattractive and I knew that if I were to grow it out then I could hopefully be an example or a beacon like “hey, it’s OK to actually be OK with who you are.”

‘This is how you were made, and who are you to try to change who that person is?

‘I had mixed emotions when I started growing it out. There’s always that little inner voice in your head when you start doing something that is against the norm.’

Although she has received some negative comments, Shannyn is able to block it out.

‘I did receive a few comments like “oh man, you’ve really let yourself go.”

‘I just really dug deep and thought nope, I’m not doing this specifically for me, I’m doing this for other women and I’m sticking to it – and I’m so glad I did.

‘My husband is one of the most supportive people I know, I am very lucky to have him.

‘He’s all about the grey hair. He said to do whatever makes me feel good, but to him, he thinks this is the best look for me.

‘My boys love their mum’s natural hair. My youngest boy, Jackson, even wants to grow his hair out like mine because of it.

‘To other women that are struggling to accept their natural hair, I’d tell them what I’ve told myself – that you could be the example to someone else and show them it’s OK to embrace who you are.’

‘To me, it doesn’t matter what age you are or what your mindset is – if you can come to terms with embracing your true self, then you’ve crossed a line that not many women in today’s society can do, and that’s like a superpower.’