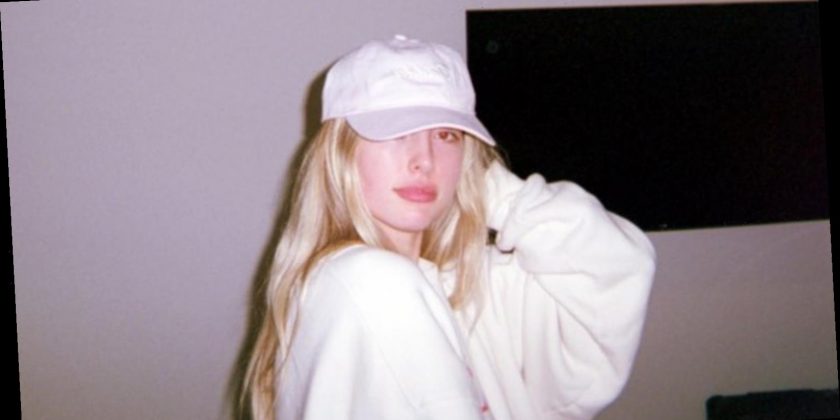 Eve Jobs, daughter of the late Steve Jobs, has spent most of her life out of the public eye. That’s all changing, though, as the Apple co-founder’s daughter just took on a gig that has thrust her into the spotlight. Jobs is the new face of beauty brand Glossier and posted pictures of herself on a shoot for the brand on Instagram. “Go check out the collection,” she wrote in the caption.

In the first photo, Jobs poses in a bubble bath as she applies Glossier lip gloss. While she’s not wearing anything but gold jewelry and an eye mask, the bubbles keep the pose G-rated. In the second image, Jobs holds a glass of wine in the bath.

As noted by Harper’s Bazaar, Jobs is 22 and a student at Stanford University — the school where her parents met. The Glossier campaign marks Jobs’ modeling debut.

While Jobs has kept a relatively low profile, she has a substantial following. Her Instagram account boasts 162,000 followers, although she doesn’t post frequently. Instead of a bio on her profile, Jobs linked to voting resources from Vote.org.

Her foray into modeling may be a sign that Jobs is coming out of her shell. The heiress is also a celebrated equestrian and is one of the top riders under the age of 25 in the world. “I was first put on a pony at two years old, but didn’t actually start really riding until I was about six,” she told Horse Sport in 2019. “I have always had a love and appreciation for animals and I think that passion was evident pretty early on.”

When asked about her future plans, Jobs seemed open to a world of possibilities. “Well, I’m actually studying abroad in Paris this quarter, so my short-term goal is to travel and explore new places with my friends,” she said. “Oh, and definitely develop my French speaking skills. With the horses, I just hope to continue working with the wonderful team of people and incredibly talented horses I have and see where it takes us.”