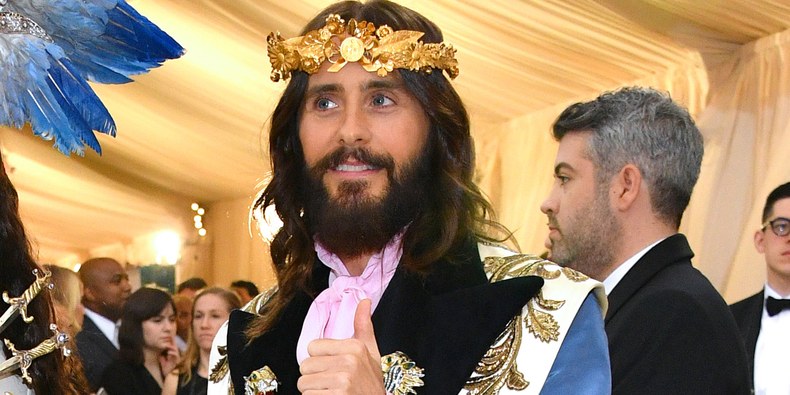 Roughly a week and a half ago, Jared Leto posted a pixelated photo of himself alongside Lana del Rey and Gucci designer Alessandro Michele to his Instagram. After a brief glance, you might almost be forgiven for mixing up Michele and Leto; both are wearing stripes, both have shoulder-length hair, and both have slightly unkempt, very Los Angeles beards. (GQ described it as “Rick Rubin big”; the radio station WSVA went with the simple “bushy”; People called it his “trademark.”)

But no more! For on Thursday, Leto made the ultimate sacrifice for a role: He shaved his beard. He parted with it slowly, lovingly, but parted with it nevertheless. In a video he posted to his Instagram and Twitter Thursday, Leto recorded the process for posterity, depicting the phases of losing his facial hair with great tenderness. The video begins with a couple of still images hinting at what’s to come: a can of shaving cream, a razor. (Does it come as a shock to anyone else that the man doesn’t use a straight razor?) Then, Leto himself, wrapped in a royal-blue robe, walks up to a mirror, picks up an electric razor with a soft “f–k it,” and begins to chip away at the beard.

He tries out a couple different characters on the way to clean-shaven-ness, mugging for the mirror and the camera. But the final destination is this: Morbius, the Living Vampire, a minor villain in the Spider-Man comics and the subject of an upcoming Sony (not Marvel) film. “And so it begins…” Leto captioned the video, adding “#Morbius” and the crying and scissors emojis. He went from hanging out in a graveyard to beginning his transformation into an actual vampire.

Leto went beardless for his turn as the Joker in Suicide Squad, and he’ll presumably have to maintain a fresh face for his reprisal in the standalone Joker film. (There are, of course, no further details on this film available, save for the simple news that it’s happening.) And Leto has previously threatened to shave his beard: Back in March, with the release of the new 30 Seconds to Mars album America, Leto promised to “chop” if the record reached number one. A bold promise, and one he never fulfilled even though the album earned the top spot on the Billboard Alternative and Rock charts. But never mind that. He’s shaved, now.

Related: Jared Leto and Lana del Rey Hung Out in a Graveyard