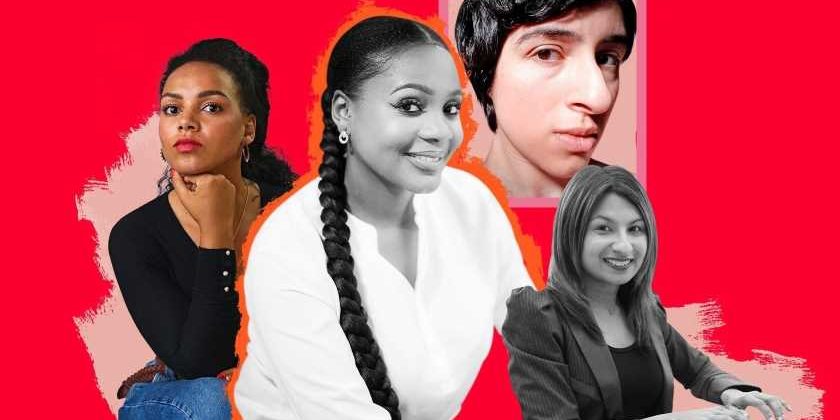 Stylist speaks to five women about the moment they embraced a feature that they used to struggle with and the importance of celebrating beauty outside of western standards.

Growing up as a Black girl in London, I began to notice early on that there were certain beauty standards that often excluded or limited women of colour.

The insidious nature of these standards was so subtle that you only began to notice them once they had already seeped into you and riddled you with insecurities that would take years to shake.

These standards, which celebrated anyone who was, quite frankly, skinny and white in the noughties, were everywhere.

Whether looking at adverts or navigating spaces where our features and skin tone were rarely seen, this lack of representation can have a severe effect on women of colour as the effects of eurocentric beauty standards can be long-lasting.

In a recent Vogue interview, Bella Hadid touched on the effects of Eurocentric beauty standards when she discussed getting a nose job at the age of 14.

“I wish I had kept the nose of my ancestors. I think I would have grown into it,” she told the publication, prompting conversation around the world about the damaging effects Westernised beauty standards can have on our own wellbeing, particularly for women of colour.

“Bella Hadid saying she wished she kept the nose of her ancestors makes me really sad,” wrote one Twitter user. “We’re out here being conditioned from the dawn of colonisation to think that Eurocentric features are the pinnacle of beauty and only later do we become conscious of this.”

While Hadid fits into these standards and in ways upholds them, for her to come to this realisation only speaks volumes to what women of colour tend to experience on a daily as they battle the pressure to fit or not fit into societal norms – but we are beginning to see a shift.

We’re now seeing more women of all shades, shapes and sizes have an open space to be who they are and veer from how advertisers and the media tell us we’re supposed to look.

We are also creating and fostering communities for us to be able to share, grow and celebrate our own forms of beauty that go beyond the Eurocentric beauty ideal.

We’ve spoken to five women about navigating the world as a person of colour and the moment they embraced their own standard of beauty and rejected what we’re told it should be.

“When I think of beauty standards, the first thing that comes to mind is pressure and need to be or do something.

“I don’t immediately see myself when I think of norms or standards and that’s pretty telling.

“The first time I really realised there was a particular standard that I didn’t fit into was when I began my journey as a wild swimmer. I looked around and realised that I just didn’t see myself in that space, from my hair to the way my body looked in a swimsuit to the simple fact that no one around looked like me I just realised that it wasn’t a space I was ‘supposed’ to occupy.

“As a result, confidence was something I really struggled with as these beauty standards really make you question everything about yourself and you have to remind yourself that you actually belong.

“But through my journey as a wild swimmer, my view of beauty evolved and the water truly healed me. I found strength in just taking to the water every day, and I would look at my legs and see that they are my strength.

“I had this personal mantra that I also have when I run – ‘my legs are my chariot and they will take me where I need to go’.

“I really learned to embrace something that I struggled to accept and made me realise we need more role models at every stage promoting the different beauty standards. That is how the next generation will come up and see themselves as leaders of their own world.”

“Growing up as a young Black girl, we were constantly bombarded with images of girls with long, straight hair. The misconception was that to have desirable hair or be deemed as pretty, you had to have long hair and a lighter skin tone.

“As a young girl with a chocolate skin tone, at times I did not feel desirable. Back then I believed I did not fit the notion of ‘ideal beauty standards’. From an early age, I was very much made aware of my position as a young Black girl and most of my school friends were lighter-skinned and at that age, I did experience colourism.

“When you’re at that age and trying to find yourself and fit into a world where you hardly see girls that look like you in the media it can be very difficult. I did question my self-worth as I felt I was not good enough. But when I started university at 19, I think that’s when self-love really kicked in for me. From being the girl that was not seen as desirable, that suddenly changed for me which was a real eye-opener. But also, we’re now seeing a change in the way in which dark-skinned women are viewed and better inclusivity which helps.

“I have a daughter and I know I will sit with her to explain the beauty standards, but it’ll be important to let her know that there are different beauty standards however she does not have to fit the ideal narrative of beauty and that is OK.”

“Growing up, having a ‘big nose’ was something I was bullied for early in primary school well into secondary school. I never considered myself physically pretty, let alone beautiful, and never thought such words could ever apply to me. It affected how I saw myself, first, as a young girl, and then, as a young woman, in view of how women are supposed to look.

“But there was an instance, on my 18th birthday, when my family and I were out for a meal. I took a photograph of myself and my paternal grandfather – a bearded, turbaned, Sikh man – and was astounded by the similarity, not only in our facial structures but specifically our noses. It moved something in me. It took me a number of years to fully embrace its meaning, but it was a definite turning point in how I saw my nose; my grandad’s nose. I’m proud to wear my ancestry right in the middle of my face.”

“A few years ago, the stereotypical view of beauty was defined as being a ‘perfect’ size, fair shade, perfectly groomed and with perfect hair.

“As a result of these standards, there were many occasions where I felt like I didn’t fit a specific standard, from going through university as well as in my corporate career.

“I used to struggle with becoming darker in the sun as I tanned easily and it used to knock my confidence, especially growing up in a society where being fair was considered beautiful. It also used to make me feel like I stood out even more for the wrong reasons.

“I often felt being a woman of colour, I was never picked for those glamorous corporate shots for the website at work or taken seriously as some of my peers in the board room.

“It was always the judgement that came with the way I looked too. That if I looked a certain way surely English wasn’t my first language (it is) or the comments such as ‘Oh we like curry. Do you eat curry every day?’

“It wasn’t until 2017 when I left my corporate career and decided to pave my own way that I embraced my unique identity and culture. Since then I don’t care if I tan or look different, dress different or even wear a fusion of western and Indian clothes. It is part of my identity and it took me a long time to come to terms with and accept that.”

“I realised at a very young age that there was a certain standard that often excluded women of colour. My mother is Asian and I’ve inherited her eye shape, and it’s something I’ve received comments on for years.

“In primary school, another child had turned around to me and said derogatory things about the colour of my hair. I had very black straight hair which is very typical of Asian women and the majority of the children in my school had blonde hair and blue eyes.

“Over the years, I’ve also had people turn to me and say ‘I don’t usually fancy Asian girls’, ‘Asian girls are not usually my thing’, which is not only massively offensive it’s also a generalisation.

“Comments like this did affect my confidence for a long time – more than I wanted to admit. But as I’ve got older, I’ve learned to not pay any attention or entertain people’s opinions and I embrace my features a lot more now than I used to.

“Individuality and being different from each other is something that should be embraced – after all, the world would be a very boring place if we were all the same.”