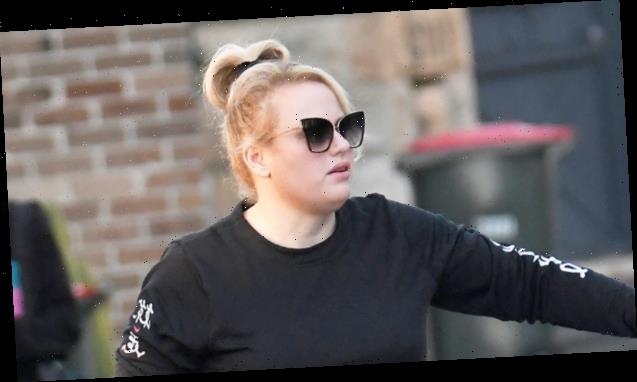 Rebel Wilson continues to share her intense workouts on social media amid her weight loss journey! The actress, who’s already dropped 40 pounds and counting, showed off her boxing skills in a series of Instagram photos on July 15!

Rebel Wilson‘s workouts are no joke! The Australian actress, 40, went boxing in style on Tuesday, as seen in a number of photos (and a boomerang video) she shared to Instagram. “Fight club!” she captioned her post, tagging two friends, “Jessie and Amy Castano,” who presumably joined Rebel in the ring.

The Hustle star put here slimmed down figure on display in a pair of tight black leggings and a hooded sweatshirt with mesh shoulders. She stepped into the ring in pair of cool, pink Nike sneakers — which matched her pink and black boxing gloves.

Rebel stood in front of a graffiti wall in the various snaps, one of which showed her throwing a few punches. Another photo captured her laughing in the ring. Rebel’s Pitch Perfect costar, Brittany Snow commented under the post, “REBS,” along with two flame emojis.

Rebel’s boxing workout comes after she shared video of herself doing a CrossFit-style exercise on July 13. The actress showcased her strength by repeatedly flipping a massive, heavy tire. “Level 1,000 girl, yeah!” Rebel’s trainer shouted from behind the camera, as she made it from one end of the outdoor concrete area to other.

It’s unclear when Rebel began her health journey, though she first debuted her smaller frame in March of 2019 at the premiere of Muriel’s Wedding: The Musical. That November, Rebel also took to Instagram to share a video of herself looking visibly slimmer in a black dress.