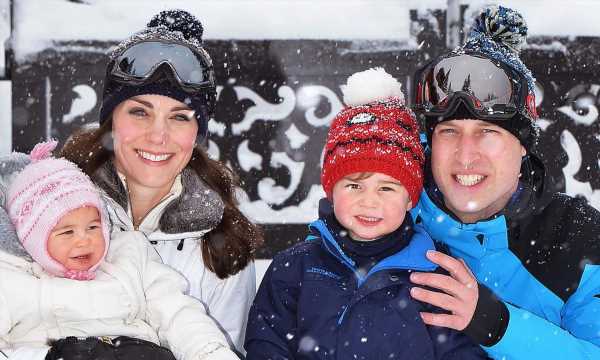 Those dreaming of a white Christmas were in luck as a cold snap brought several inches of snowfall and ice across the UK this week.

Amongst those embracing the wintery weather were the Prince and Princess of Wales‘ children, Prince George, Princess Charlotte and Prince Louis, who enjoyed the fun with their schoolmates at Lambrook School. According to the independent preparatory school’s Instagram page, pupils had “Snow much fun today!” playing in the snow.

WATCH: Best photos of the royal family hitting the slopes

Photographs shared to the public Instagram page showed students laughing as they built a snowman, while other snaps unveiled the idyllic wintery scene surrounding the school’s grounds.

Other pupils had made a mini snowman and were proudly holding it up on display. Though the royal children did not feature in any of the photographs, it seems children of all ages were treated to the time out in the snow.

Back in 2016, George and Charlotte experienced their first taste of playing in the snow when the royals visited Courchevel for their first family holiday.

The palace released official portraits showing William, Kate and their young children posing against snowy backdrops. “The Duke and Duchess of Cambridge are delighted to share new photographs of their family,” a spokesperson said at the time.

“The images show Their Royal Highnesses enjoying a short skiing holiday with their children in the French Alps.

“This was their first holiday as a family of four and the first time either of the children had played in the snow. It was very special and fun short holiday for the family, and they are grateful that John Stillwell [The PA photographer] was able to capture the moment so well. The Duke and Duchess hope people enjoy the photos.”

The royal children have already started developing their skiing skills

The youngest of the Wales children, Prince Louis, is also believed to have enjoyed a ski break with his family in Courcheval in April this year. The royals were spotted on the slopes and enjoying meals at restaurants in the luxury French resort, along with the Princess of Wales’ sister Pippa Middleton.