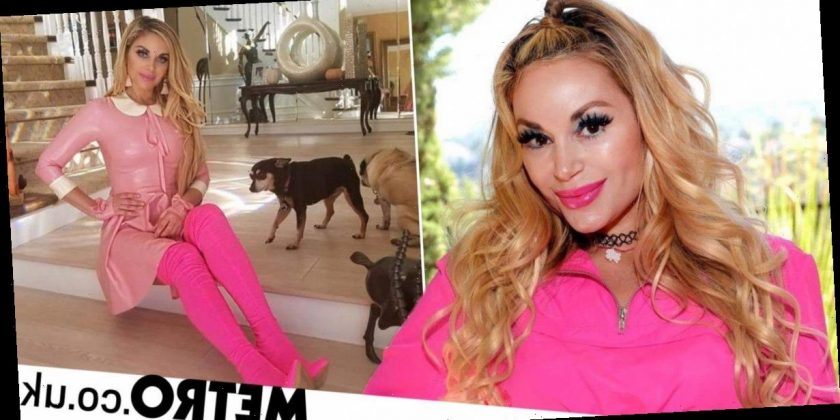 Barbie has clearly had a major cultural significance since Mattel launched it 60 years ago.

In the last 20 years years, we’ve seen a few different women so committed to the looks of the iconic blonde doll that they’ve had extensive surgery to look like her.

But one woman who idolises the fictional character wants to do it without plastic surgery.

Real estate investor Marcela Iglesias has had bum lifts and lip fillers but is scared to go under the knife to achieve her dream look.

The Los Angeles based mum-of-one is obsessed with the idea of transforming herself into a human Barbie and before she hit puberty, she would stuff her bra and bum to create the curves.

She has since grown natural curves and uses wigs, contacts and fake lashes to try to resemble the toy.

Her hourglass figure has prompted many comments from strangers who have accused her of being ‘plastic’ and ‘fake’.

But Marcela insists that despite having had a Spider Webb bum lift, Botox and lip fillers, she has not had plastic surgery.

Marcela, originally from Argentina, dresses meticulously to look like Barbie using Barbie-inspired outfits, accessories and makeup which take her 40 minutes to put together.

She thinks her obsession grew as she was not allowed to have a Barbie doll as a youngster as her mum didn’t let her.

She said: ‘I remember seeing all my friends and neighbours playing with the dolls and having lots of fun dressing them up in new outfits, playing house with them.

‘As time passed by, I became more obsessed with the aesthetics of the doll because every single one of the Barbies look perfect to me.

‘I started to stuff my boobs and the butt to resemble the doll more but when my body developed into a curvier shape, it looked very voluptuous all of a sudden.

‘It was then when I started thinking of becoming a ‘Human doll’ as I now have the curves of the doll and I’m not a child anymore.

‘I started to buy more clothes to change my style and I started wearing my mum’s very high heels, I also did my first highlights at the age of fourteen to appear blonder.’

She then grew into her body and moved to the States where she met her husband. Living in Hollywood also made it more accessible to buy items and proceduers that would help her achieve her desired look.

‘I always thought of the possibility of breast implants but for some reason after over twenty consultations I still have hesitations about them. So, I put that idea aside.

‘Living in Hollywood helps a lot because there’s a lot of stuff that I can buy to look more like the doll.

‘Lots of people accuse me of looking fake but if you know me in person, you’ll totally see that my beauty is natural and yes I usually create the look with make-up but that doesn’t mean that I am a plastic person.’

Her husband Steven loves her look and has been part of her transformation.

Over the course of three years, he has undergone procedures such as a platysma plasty, chin implant, Botox, fillers and PDO threads to tighten sagging skin.

Marcela added: ‘I admire what the doll represents more than how she looks; I am very respectful of the image of the Barbie doll as I want to encourage all men and women around the world to pursue their dreams and to achieve the look they want.

‘But I always say that surgery should be considered the last choice; I want to be perceived as a very strong woman that knows what she wants rather than a “bimbo”.

‘Barbie is an inspiration to be whatever you want to be. You control your own destiny.’