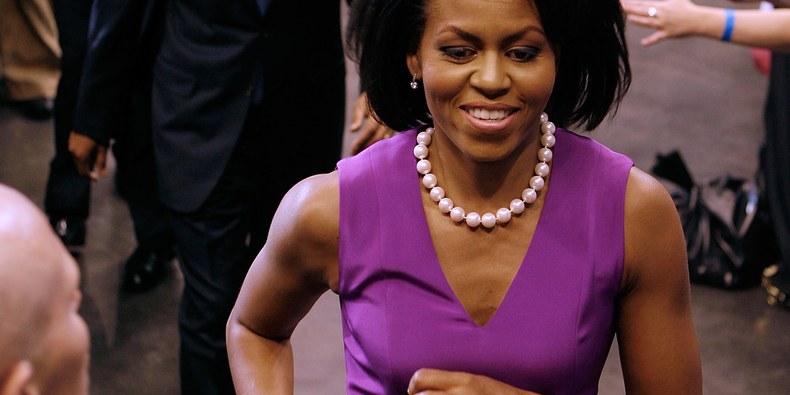 THIS IS NOT A DRILL, BOO BOOS! When @michelleobama calls, you pop a breath mint in your mouth and your underoos and come a-runnin’! The greatest First Lady of all time and shero to women, especially us black gurls, invited @msjwilly & I to DC to sit down with her for a special new episode of @2dopequeens! Jess & I had the time of our lives as we chatted with Queen O about her journey in the White House, her incredible new initiative @globalgirlsalliance, and her jaw-droppingly good, must-read book #Becoming. What a dream come true! Check out the episode on @applepodcasts. Link is in the bio, honey buns! #YQY #IAmBecoming #HowMyHomegirlsAndILookWhenPeopleTryToComeThruAndGentrifyOurNeighborhood #NotTodaySatan P.S.: And yes, like a total dork, I was wearing a Michelle Obama pin from @thefound when I met Lady O!

On Wednesday, Michelle Obama stopped by for a surprise finale episode of 2 Dope Queens, the popular WNYC podcast hosted by comedians Phoebe Robinson and Jessica Williams, who released a farewell letter on WNYC’s site.

“We’ve got some big news, so you might want to sit back like Wendy Williams about to serve the tea,” Robinson and Williams wrote. “The final episode of our beloved podcast 2 Dope Queens is hitting your feeds today! In the words of Boyz II Men, it’s the 'end of the road.' We want to thank you, listeners, for being with us from the very beginning,” they continued. “As for this last episode, we are going out with a bang, y’all. A conversation with her majesty Michelle Obama. When the queen calls, the Queens answer! We couldn’t have dreamed up a better, more meaningful, finale.”

While promoting her memoir, Becoming, and speaking about her initiative, the Global Girls Alliance, which connects leadership and development to the Obama Foundation in order to “build up this next generation of leaders,” the podcast opened up with a very frank discussion about a topic 2 Dope Queens often gracefully covers: the complex and politicized relationship black women can have with their hair, and the ways in which men or white public figures are often exempt from exerting the same amount of energy towards their appearance. “This wasn’t just a First Lady journey, this was a black professional women’s journey,” Obama explained.

Obama revealed that she would often get briefings for travel that “men in politics don’t understand,” which included the weather report from her destination. “Are we in the rain? Are there cobblestones? Is it hot? Is it cold?” she would ask, because her hair and outfits would need to be suit the elements. Other women on the staff would then defer to the First Lady for details. “I’d get these briefings, and then all the other senior women who never get briefed in that way would call and be like, ‘What are we doing tomorrow?’,” she would say, before telling them, “Girl, don’t wear heels because we’re on cobblestones and we’re gonna be walking up a hill and there’s gonna be grass…there’s a whole other women thing that no one talks about or writes about.”

During her tenure in the White House, one of the former FLOTUS’ main beauty missions, she said, was to keep her hair healthy, “because at the end we only have one set of hair follicles…and I wanna have some hair when I’m 70.” When asked how often she would her hair done in a week or month, Obama admitted that “it depends on what the schedule is.” She talked about having “up days,” throughout the week. An up day, according to Obama, “was the day I was getting my hair and makeup done,” so that she could make all of her public appearances for the week in one day without having to go through the sometimes arduous process of getting glam’d up for events day after day. Still, she did not need to spend every day in her life in full glam mode, and would occasionally take some time off to keep heat and other products out of her hair in order to maintain its health. “If I was down, I’d be like, don’t call me because I’m not putting heat on my hair and we’re not doing any of that,” she told the comedians.

On her “down days,” the First Lady would wear cutoff shorts and baseball caps around the White House, often to the shock of some of the staff. “[I would be] coming out scaring butlers, like ‘It’s just me! It’s a down day! Don’t freak out,’” she joked. “You gotta have hair and clothes that can transition from doing pushups on the floor with Bishop Tutu—which I did by the way. He challenged me to a pushup contest once,” Obama said, while acknowledging her journey to curate an appropriate wardrobe that ranged from haute couture to casual weekend wear.

Obama also praised the millennial generation for being open to conversations about complex relationship a black woman may have with her hair. “My girls, they own all of what they do…because they were brought up in a generation where it was like yeah this is who I am, this is what I’m doing,” she said. “I think it is a political freedom statement that you all are even talking about this and it gives the space for everybody to talk about it and figure out what works for them and that it is an effort. How are people gonna understand it if we don’t talk about it?”