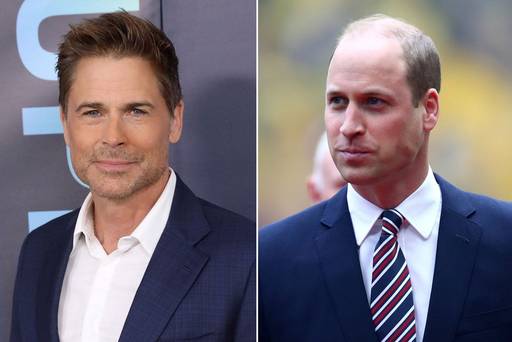 Actor Rob Lowe shared one of the most traumatic experiences of his life during a recent interview with The Daily Telegraph, but you’ll probably struggle to guess exactly what it entailed.

It wasn’t the 1988 sex tape scandal which nearly spelled the end of his career. It wasn’t the devastating drink and drug problem that led to a stint in rehab or the shock he felt when his mother was diagnosed with stage IV breast cancer.

No, one of the most traumatic moments of the actor’s life involved hair loss – and not his own hair loss, but that of someone else.

When asked if he considered himself more or less vain than British men, the former teen heart throb replied: “That’s a low bar. Can we talk about William? I mean, the future king of your country let himself lose his hair!

“So when I say British men set a very low bar… Honestly, one of the great traumatic experiences of my life was watching Prince William lose his hair.”

Lowe went on to point out that there is a pill for male pattern baldness – and he credits it for his preternaturally full head of hair.

“The first glimmer that a single hair of mine was going to fall out, I was having stuff mainlined into my f***ing veins,” he said. “And that’s what I did for the next 30 years.”

The Lowe blow (sorry) led to an almost inevitable online backlash. Indeed, just a few hours after the interview went live, the twitchfork mob was baying for Lowe’s blood.

The actor was slammed as vain, arrogant and self-obsessed, while Prince William was praised for allowing nature to take its course and not succumbing to medical or surgical intervention.

Most will agree that Lowe should have been called out for his mean-spirited comments. After all, who wants to take grooming advice from a man who looks like the love child of Dale Winton and a ventriloquist dummy?

By the same token, we should probably give him a modicum of respect for admitting to hair loss treatment in the first place.

Like it or not, hair loss can be a deeply traumatic experience for a man, and while the Prince Williams of this world deal with follicular challenges with a stiff upper lip, many more start researching the side effects of Minoxidil and googling ‘hair transplant Turkey’ the moment they start noticing hair in the sink.

These treatments used to be stigmatised (the doll’s head appearance of early hair transplants probably didn’t help matters), but thanks to celebrities like Wayne Rooney, James Nesbitt and – whisper it – Rob Lowe, they are now much more out in the open. The question, of course, is what happens when they become so out in the open that they become a beauty norm?

Consider for a moment chemical hair dye and the vast amount of time and money that women invest in masking their grey hair.

Granted, the body positivity movement has encouraged some women to embrace their grey hair in recent years, but there are still plenty of women who react just like Lowe did when a contemporary ditches the dye.

They have a visceral reaction when they notice grey in their own hair and, sadly, this shame can spiral outwards and suck in women who might otherwise have gone au naturel.

And that, right there, is the trouble with beauty tweakments and treatments: they can become so normalised that the people who don’t partake begin to look abnormal.

Just think, when was the last time you saw a child with protruding ears or, rather, a child whose parents didn’t think ear pinning surgery was a necessary surgical intervention?

It is often said that there is no shame in a little nip and tuck but that’s not entirely true.

Body image issues and shame go hand in hand, and those of us who have opted for aesthetic intervention should be careful not to project this shame on to those who have opted out.