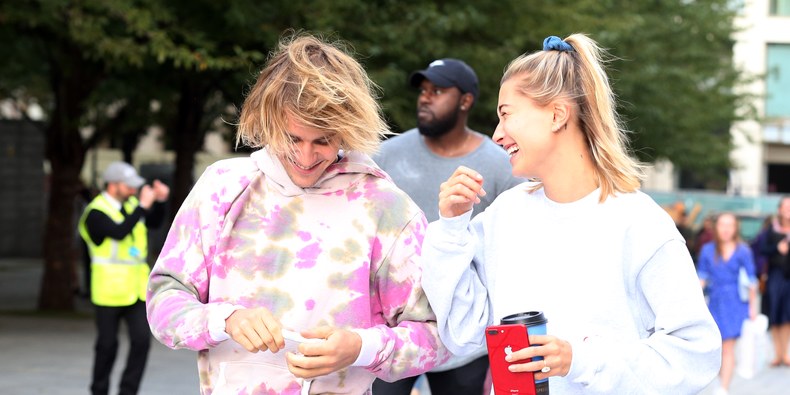 The traditional gift for a 50th wedding anniversary is gold; for 25 years, it's silver; and after six weeks of marriage, apparently, it's a drastic new haircut. That's according to Justin Bieber, who took to social media on Tuesday to debut a freshly shaved buzz cut, putting an end to all those precious matching messy-bun moments with similarly flaxen-haired wife Hailey Baldwin. In the photo—which Bieber posted on both his Instagram Story and Twitter feed, because, yes, it's that important—he stands in a pristine bathroom, flashing a smile while snapping a good old-fashioned mirror selfie on his phone. In front of him on the counter are a pair of regular classroom scissors that, hopefully, were not responsible for the major makeover.

The cut appears to be an extremely close shave, highlighting every peak and valley of his natural hairline that was previously hidden by his shaggy layers. In fact, it may be Bieber's shortest 'do yet: For most of his career, he's maintained some easygoing length and floppy bangs, and while he did debut a closer crop in mid-2016, it wasn't quite as buzzed as this pre-Halloween chop. We can only assume this has something to do with Baldwin's influence, since she previously took credit for convincing the pop star to shave his mustache, and was spotted sticking close by his side while he went under the scissors in early August.

Bieber's new look comes only a few months after he declared his love for his longer hair and vowed never to part with it. "Long hair don't care and my ['stache] is gorgeous," he wrote in his Instagram Story at the time, per People. In a subsequent selfie, he added what may be the most ambitious midyear resolution in hair history: "I'm going to grow my hair down to my toes." Clearly, that hasn't panned out.

Despite the fact that it represents a failed goal for the Biebs and the end of a long-haired era, the new buzz cut is already a hit with his fans. While a small minority of Twitter users have replied to Bieber's selfie with mournful messages for his previous free-flowing style, most are more than thrilled with the new "Buzztin," as they've so lovingly dubbed the transformation. The real question, however, is how the biggest Belieber of all feels about her husband's new look.

Related: From Justin Bieber and Hailey Baldwin to Britney and K-Fed: 15 Celebrities Who Became Engaged Before Turning 25