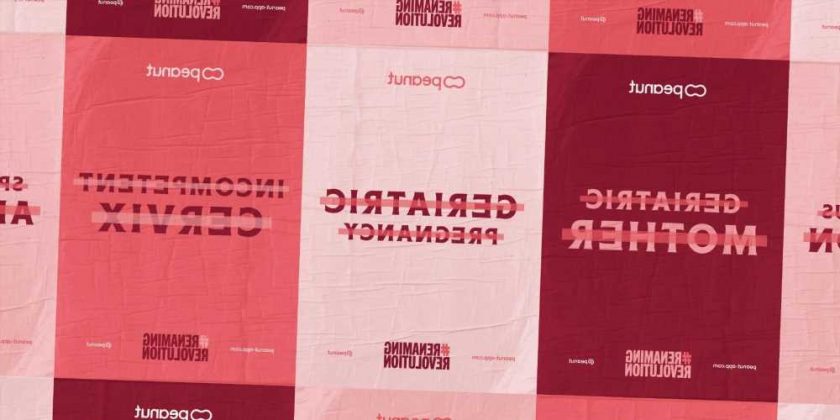 'Hostile uterus,' 'lazy ovary,' 'habitual aborter,' 'unfavorable cervix' — these are just a few of the many offensive, yet totally normalized terms women encounter in 2021, from actual doctors, on their path to motherhood.

Peanut, a social network connecting women through all stages of motherhood, wants to replace these harmful and outdated terms that are "too often used during the most sensitive and vulnerable times in women's lives," says CEO and founder Michelle Kennedy. So they teamed up with an expert panel of linguists, therapists, and ob-gyns, and reached out to their community of users, to create a long-overdue glossary of modernized terms.

"Terms like 'inhospitable womb,' 'geriatric pregnancy,' 'spontaneous abortion,' or 'advanced maternal age' have traditionally been used to designate a woman's reproductive standing. However, this terminology is outdated," said Dr. Somi Javaid, ob-gyn, surgeon, and Founder of HerMD, and one of Peanut's expert panelists. "The goal with medical terminology should be to educate women and to shift away from blame or hurtful labels." The glossary is part of Peanut's campaign, 'The Renaming Revolution', which they announced along with Chrissy Teigen last month. It all started when Teigen tweeted about a gut-wrenching video from a 35-year-old woman whose doctor used the term "geriatric" to describe her medical standing if she were to get pregnant. The viral thread continued on the Peanut app, where hundreds of women joined the conversation sharing the terms that they have experienced, resulting in over 200,000 interactions.

Here, a few of the outdated terms sourced from the community to describe fertility, pregnancy loss, pregnancy, birth, and motherhood — along with the new suggestions — that can be found in the glossary: As the brand points out, more than half of its users (55%) struggled with their mental wellness over the past year — and with Maternal Mental Health Month kicking off in May, it's time to start talking about the role language plays. "As a psychologist specializing in reproductive and maternal health, I hear about the myriad ways these outdated and undermining terms affect women navigating the motherhood trajectory," Jessica Zucker, Ph.D., author of I HAD A MISCARRIAGE: A Memoir, a Movement tells InStyle. "As women traverse these reproductive milestones, they need to hear terms used about their bodies and experiences in them that are compassionate, accurate, and free from judgment."

The complete Renaming Revolution glossary is available today on Peanut's site, and printed copies will also be distributed to doctor's offices and clinics. "Bringing these outdated and harmful terms to the attention of physicians and society, in general, is what's going to ignite the education process," Dr. Javaid tells InStyle.

"It is time for a sea change when it comes to how we talk about women's bodies," Dr. Zucker adds. "By adopting this thoughtful, modernized glossary of terms, we will no doubt melt away antiquated stigma and shame that should have no part in women's reproductive lives."