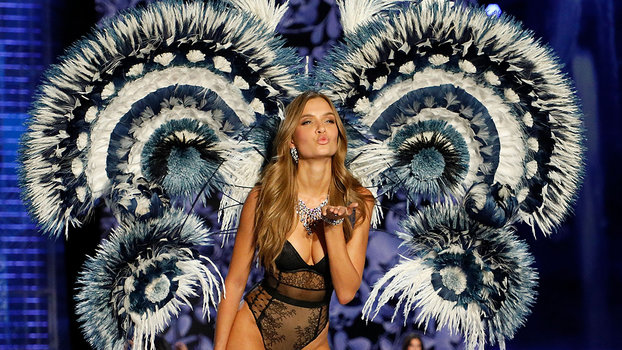 TBH, I don’t care very much about the Victoria’s Secret Fashion Show. I’ve never found a bra from the brand that truly fit my 36 AA-sized boobs well, and honestly, if I have 60 minutes of free time to watch TV, I’d rather binge on Game of Thrones than watch strangers parade down a catwalk wearing wings and underwear.

That being said, I do love a good fitness routine. When I got the chance to “train like an Angel” with veteran Angel Josephine Skriver with a fitness routine similar to the one that the Victoria’s Secret Angels get ready for the runway show, I was intrigued.

From what I’ve seen on social media, it seemed effing intense. Some models commit to two-a-day workouts featuring weights, squats, and boxing, while others set out to master my worst workout nightmare: jumping rope. Bracing myself for what could be a hellish experience, I met up with Josephine at the Dogpound training gym in New York City, a private facility that’s known to be an Angel fitness hotspot.

For the most part, each model teams up with a trainer, who guides them through a personalized exercise program that will help them feel their best when it comes time to model for the show. Josephine’s trainer Rhys Athayde is based at Dogpound, and specifically helped her strengthen her back muscles so that she could carry the wings down the runway — some can weigh up to 18 lbs.

Josephine told me she tries to follow a workout pattern of exercising for three straight days followed by one rest day, switching between full-body or targeted workouts and cardio. In addition to her rigorous workout schedule, she also sets goals as a point of motivation when she starts her VS Fashion Show training. This year, it was perfecting her jump rope skills.

To give me a taste of her training, Josephine, decked out in her best VS Sport gear, walked me through four moves she regularly performs in order to target her back. Usually, she says she does around 15 reps of each move, three times through. After road-testing them with her, I incorporated them into my own routine for two more workouts.

Below are the four moves I learned, along with detailed descriptions of how my muscles felt during every painful rep. Spoiler: Social media didn’t lie. This shit was intense.

The first exercise we started with was pull-ups, a move that I’m notoriously no good at. I think I managed maybe one during the Presidential Fitness Test in 8th grade and haven’t tried to complete a proper pull-up since. Thankfully, they were banded, which meant you feet were stacked in a resistance band attached to the pull-up bar. This gave you a little more leverage in pulling yourself up. In addition to helping with upper body arm strength, this move targets the upper back. I was shaking a little towards the end, but could manage to lift myself up.

This move is incredibly simple, but super badass. Rhys had Josephine sit on the floor with her legs straight in front of her. Then, she pulled down on a metal chain like she was climbing a rope without lifting her legs up or attempting to use power from her legs. It’s all in the arms and the back. The chain added weight to the move and made me feel like I belonged in The Terminator. You really don’t think it’s going to be hard, until you get to the 7th rep and realize you have two more sets to go. It’s a recipe for extreme muscle burn.

I was shocked to see a move I regularly do in my own routine in Josephine’s Angel training program. Because I already complete this move in my gym about two times a week, it didn’t feel as difficult as the others. You’re basically on a machine that allows you to make a “rowing” motion, but it’s weighted. With Josephine’s trainer’s direction, I realized I wasn’t paying enough attention to my posture during the row. Dropping my shoulders and standing up straighter, I realized my seated row could have been so much more affective.

Using boxes, Rhys lifted a bench into the air. The idea is to lay on the box, face down, and perform a rowing motion. Because the bench is lifted from the ground, it allows you to fully extend. I actually had never done this move before, and really felt it in my back muscles, in addition to my triceps.

By the end of the week, I was definitely feeling it in my back, arms, and shoulders. Even though I winced, I felt pride in the fact that I tested my strength in new ways. I also learned that Josephine’s “train like an Angel” routine isn’t too far off what she does on a regular basis, perhaps just a bit more intensive. I also found out that Josephine and I both approach fitness as a way to strengthen and exercise our bodies, but also as a source of mental clarity and a cure to jet lag.

I still don’t think watching the VS Fashion Show is on my schedule, but training like an Angel? Pencil me in for next year.