In July 2017, then-President Donald Trump tweeted that the United States government would not permit transgender people to serve in the military, citing “tremendous medical costs” and “disruption” as justification. When that decision became official shortly after, it led to national outrage—and had serious consequences for Nicolas Talbott, who had his sights set on a career in the Air Force.

“The ban impacted my education and my career goals,” he tells Men’s Health. “I really had to change the trajectory of my life. It spilled over into everything I’ve been doing for the last few years.”

Nic first became passionate about pursuing military service after taking a class in counterterrorism in college, and his professor pulled him aside and told him that he would be an asset to the Armed Forces with plenty of opportunities open to him. “I had to explain to her that at that time, I couldn’t, because I was transgender,” he says, “and the Obama administration had not yet allowed openly transgender service members.”

When it was announced in 2016 that the Department of Defense would be allowing open transgender service, Nic immediately reached out to an Air National Guard recruiter, and spent the next year and a half preparing to start his military career. Then Trump’s ban came into effect, and Nic realized he would have to fight for change on home soil before he would be able to serve his country. And so he became a plaintiff in Stockman v. Trump, one in a number of court cases challenging the administration’s ban.

“It’s something that, when the opportunity presented itself, I realized I really needed to do,” he says. “I wanted to be a part of making that change and getting this ban reversed.”

Having already begun training in the Reserve Officer Training Corps (ROTC), Nic remained committed to staying service-ready while continuing to study for his Master’s degree in military intelligence. “We had physical fitness tests at least once, sometimes twice a semester, so I was definitely trying to stay in peak physical condition for that,” he says. “My workouts were mostly strength-oriented, and then I’d try to add in some cardio. I’m one of those tall skinny guys, so I find it important to focus more on weightlifting.”

He adds that his fitness routine, which involved some kind of workout every day of the week, helped him stay strong in more ways than one while opposing the ban in court and in the media. “I’m always trying to get that mind and body connection, not only when I’m exercising but really when I’m doing anything,” he says. “I think staying in peak physical shape and getting to exercise every day really did help to reenergize me on days when I was feeling a little bit sluggish, in general life and in the fight against the ban. Those two things really did go hand in hand.”

When President Joe Biden took office in January this year, one of his first actions was to make good on his campaign promise and sign an executive order lifting the ban on transgender people serving in the military. While Nic is thrilled by the news that his dream career path is once more within reach, he knows that there is still a great deal of work to be done. 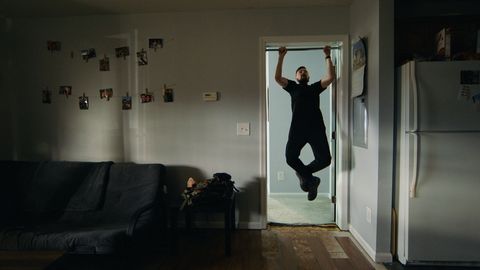 “I still plan to continue to fight for passing legislation so a ban like this can never happen again,” he says. “I’m always trying to help advocate for equal rights, and I mean for everybody, not just the LGBTQ+ community. We just had big news with the Equality Act passing last week in the House of Representatives, so I’m definitely doing some work right now to try and educate folks, raise awareness, and really just ask: why are we even still debating the idea of people having equal rights in 2021?”

And while he waits for Biden’s new, inclusive policy to be enacted so he can officially enlist, Nic is making sure to stay on track with his physical training. “The biggest change since President Biden signed the executive order is that I’ve started running more,” he says. “I’m not a fast runner, but I can run long distances, so I’m trying to bridge that gap between speed and endurance.”

He’s already easily able to pass the PFT to a sufficient standard, but now that he is finally about to be judged solely on his own abilities, Nic says he wants to keep raising the bar.

“Bare minimum is not enough for me.”