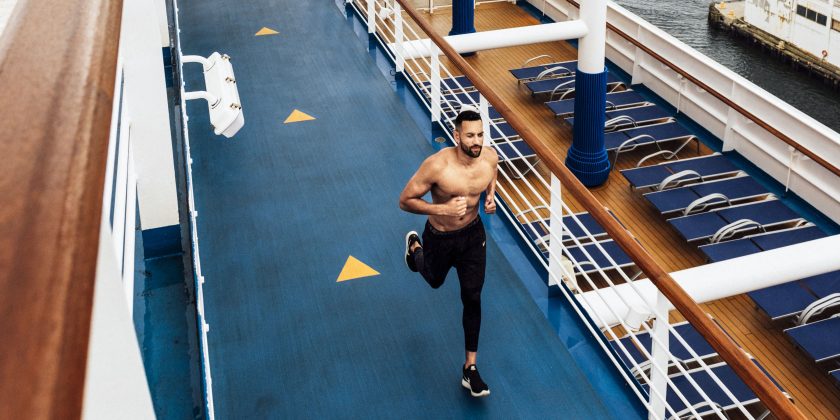 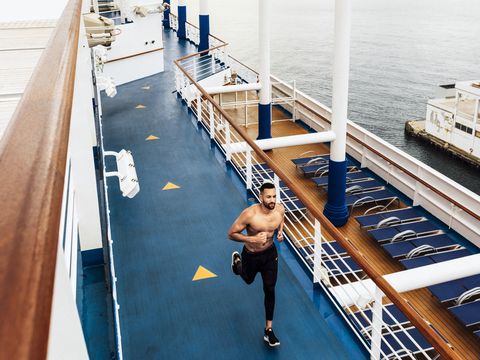 Take your current job. Add thousands of people whom you have to make happy for days and days. Add a staff that includes comedians and blackjack dealers. Add a Motown Night, the mechanics of which you still need to figure out.

Also, your office might get tossed around by a bomb cyclone. Oh, and you live at your workplace.

That’s what Matt Mitcham faces as cruise director of the Carnival Vista (population: 5,384), with guests all looking to him for an amazing time all the time. He is the North Star. The spirit guide. President of Float Nation. “If I don’t keep my cardio levels up, doing highly active events gets exhausting,” he says. In other words, if he doesn’t work out, he doesn’t show up. And then Aunt Naomi won’t be cabbage patching at the “night club” tonight. For Mitcham, that’s a tragedy at sea.

So every day begins with the 33-year-old rolling out of bed and banging out 200 pushups in six minutes.

The Man With the Mic

He began working at Carnival at age 21. Three years later, he took the main mic when his boss sprained his wrist. Mitcham’s been keeping the crowds raucous ever since, whether emceeing morning trivia for kids or leading oldsters through Zumba classes.

He’ll typically work one cruise ship for six to eight months, take a month or two of “real” vacation, then head to the next ship. He’s a mini celeb on each cruise, and being recognized (and having roughly 29,000 Instagram followers) is part of the job. “My goal is to make guys want to be best friends with me and make girls fall in love with me and make the grandmas want to marry me,” he says, not joking.

It’s an exhausting set of duties, so six days a week, he spends early mornings in a bare-bones crew gym. “It’s not a land gym,” he says.

It’s not a land gym, but it’ll do.
ARTURO OLMOS

Mitcham uses moves like military presses, bench presses, and rows, or runs around the Vista track. Usually by 7:00, he’s in his cabin doing an abs finisher, then taking
a cool down swim. It’s all over before the guests have flooded the pool area. Then he’s off to figure out Motown Night.

The Break of Brawn

Do each move for 45 seconds, then rest for 15 seconds. Repeat the entire circuit twice.

Start lying on your back in situp position, feet flat on the floor. Your arms should be straight and at your sides. Lift your shoulder blades off the floor 1 inch. Keeping your arms straight, reach your right hand toward your right foot, twisting your torso so that you can reach farther. Return to the start and repeat on the other side.

Start lying on your back with your legs straight. Place your hands under your tailbone for support. Keeping your legs straight, raise them until your feet point toward the ceiling, pause, then return to the start.

Start lying on your back in situp position, feet flat on the floor. Keeping your shoulder blades on the floor, lift your feet and your tailbone off the ground. Squeeze your abs, then return to the start.